May 16, 2016
The one thing about the University of Northampton BA Actors and their Shakespeare productions is that you always get something different. Therefore I have learnt to fully expect a transposed version of shows and this version of the classic tragedy Romeo and Juliet brings us into the nineties, rife with shell suits and a soundtrack including Fat Boy Slim. Each end of the theatre space has a wall strewn with graffiti, "I f**ked Lady M" being one particular boast. Above one end, a bit of scaffold and a basketball net lies in wait as a sort of balcony. I wonder what that might be used for? We also have gym benches which will be used in many inventive ways during the show. The scene is very much set for family war and love to play out on.

I haven't seen Romeo and Juliet before, however I knew it didn't end well and I knew of that aforementioned balcony scene. However much like the previous days The Comedy of Errors, I got it, I really did. Whether it is the wonderful presentation or talent, or my growing understanding of the bard. Either way these two Shakespeare shows worked for me unlike any I had seen previously.

At the helm with two really wonderful performances as the leads are Jack Baylis and Jessica Bichard. Romeo played by Jack Baylis looks every inch the heart breaker and conveys the emotional turmoil with great care. He also has the physical action much required for these shows now, highlighted in the particularly horrific taking apart of Tybalt (Liam Faik). Really really brutal, but quite brilliantly executed. Bichard plays Juliet with equal skill. Her strong Scottish accent bringing a tremendous amount to the play, giving a new appreciation the Shakespeare's language. They form a terrific duo and you can every bit believe their love for each other.

There were many other performances I enjoyed from the nineteen strong cast. Picking a few absolutely has to include Steven Croydon's flowery and flimsy Peter. Quite a scene stealer even when just sitting on the bench eating biscuits. A really strong comic performance. Also quite brilliant despite only really having one scene is Jamal Franklin's hip and cool Friar John. Playing to the audience with knowing winks and taking every moment of his scene with his swaggering off the stage. I also enjoyed Florence Rees-Waite's Nurse, often frivolous but later distraught by events. It was a performance of surprising depth in the sporadic appearances.

My two favourite performances though other than the two fabulous leads were Lewis Hodson's Friar Laurence and Lee Hancock's Mercutio. Hodson simply is the Friar, right from his comical first appearance sitting smoking dope, he never falls from the vitally important story driving character. Hancock meanwhile is simply outstanding. Really one of the most mature performances I have seen at the second year stage so far. He also has a tremendously powerful voice, which I simply cannot wait to hear projected from the Royal stage next year.

In addition to all the wonderful performances in the show, there are some tremendous dance routines from Karen Esaya-Chiwembu and Jamal Franklin, particular the final uplifting one. Although it is a tad surreal to see the dead up and grooving again. It does let everyone leave with a smile on the face though, which might have been strained with the usual corpse ridden floor.

So yet another brilliant reinterpretation of Shakespeare from the BA actors. I cannot help but feel these are the best bard ones I have seen and this coupled with the fact that this group of actors seems to be every bit as strong as the previous ones, gives great hope that the next year is going to be every bit as good as my previous three. I very much await what they will have for us with their end of year shows.

Romeo And Juliet ran between Thursday 12th and Saturday 14th May, 2016
Twitter feed for the University actors is @BA_Actors 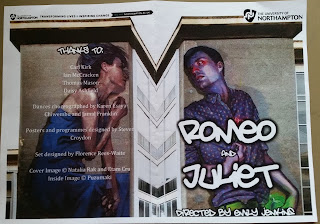