May 24, 2016
The wonderful Amber Mae was quite an enigma within some of the University shows, portraying often the silent element of proceedings, especially in Orientation where she provided a song for us but little else verbally. However she spoke perhaps like few others with her movement and facial expressions, despite often being silent, she was frequently the centre of the eyeball for the audience, busy flitting around. So for her Flash performance, a solo one was a dream ticket. One to finally get to see her in full swing to do what she chose. It is true that for much of the first few minutes as we sat watching Amber sketch and paint that I thought she was not going to speak again.

We sit in the basement of Hazelrigg House (one of two Flash shows to take place entirely there) and we learn that this is a special confinement location for people to partake in creating art. Something that has been banned in the outside world. They are however not permanently confined, this is a place that they go to by choice to be artistic. This is at its core a very political play, effected and very probably created by the currently troubling arts cuts. No matter what some people may think, art effects everyone and a world where it is not permitted to exist is unquestionably a scary one.

Over the course of this play, we develop a very real connection with this world, a world very reminiscent of that of 1984, indeed we learn that via a camera, a Big Brother type figure is always watching. It sadly does feel very believably though, including the robotic human at the end of the intercom spouting preassigned sentences with no course of thinking for their self. Amber's character exchanges a pointless exchange after being locked in her cell after missing her warning bell, which many will probably feel they have done before with a call centre or two.

It is a carefully constructed piece with unobtrusive but perfect use of tech. It gives us joy from Amber's character dancing and singing to the pirate radios offerings and moves us through to the sadness of the removal of her work. Amber is once again a spark of likability, a visually captivating performer. She also absolutely leaves nothing in the tank from her performances, which is totally evident by the explosion of emotion at the end of the play. She was always fun to watch, but with Mortem Artis, she paves her way for what I think is certain stardom. Superb. 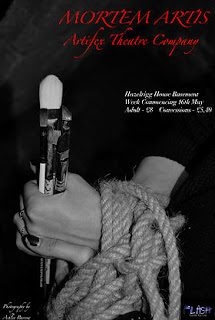