May 18, 2016
"Welcome to the apocalypse" is a rather encouraging tagline for The End from Phone Box Theatre. Following a successful, yet failed cancer drug introduction in 2017, this is indeed the apocalypse. While curing cancer, cell corruption has caused the dreaded Z to appear.

It is perhaps telling that The End is the only Flash this year (that I aware of anyway) to setup a Facebook event. As like no other I have yet seen this week, this is more of that E word than any other.

Long before you have entered the venue of St Peter's Church this play, and I use the word loosely, has already begun. One by one the audience is ushered into the church by the tactical vested Roach (Daniel Gray). Rough and vicious in demeanor, you know that it is wise not to mess with him. Your destination briefly is an encounter with Scruff (Connor McAvoy), who does a check for bites and shines a torch in your eyes and mouth to make sure you are not one of them. After the exam you are sent to your seat, occasionally one selected by a prowling and scowling Harper (Matilda Hunt).

It is an exceptionally well controlled setup and it takes time which offers either a brooding menace, or a giggly atmosphere depending how you take it. If you take the latter, prepare for potential scorn. The premise of all this is that we are survivors and evacuees at the church in an attempt to survive the infected hoards outside. We are introduced to the characters, all distinctly different and eventually the fourth member Faith (Caroline Avis) arrives in some sense of drama and for a while provides some humour to proceedings, despite bringing initially bad news to the trio. Her delicately and relaxed handing out of biscuits to the audience is a neat and really clever touch as we absorb ourselves more into the situation.

In case you are reading this before an opportunity to see the show has occurred, I will go no further into the story (or more correctly) event that develops. Suffice to say that it very much involves the group of Phone Box Theatre taking really surprising brave decisions to involve the audience..

There truly is little to disappoint with this production, more interactive that many shows I have seen before including bold interplay with the audience which unquestionably will vary depending on the audience. I would have loved to have seen this with a more theatre unfamiliar audience perhaps to see what happened, as most of the audience on the night were the obviously well understanding acting students.

The characters are all perfectly played and distinctive and during the brief time with them we happily form a full understanding of all their traits. Something that you do not always get from a show of this short length. It ends with a finality that perhaps surprises and that many people didn't realise was it, I myself perhaps expected something else to happen such as the drama that was evolving. However it leaves you in no doubt that you have "experienced" a real great piece of theatre. Absorbing from start to finish. 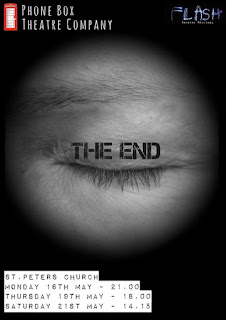