Review of The Comedy Of Errors performed by University Of Northampton BA Actors at Isham Dark (Avenue Campus), Northampton

May 13, 2016
The performance of The Comedy Of Errors by the current second year actors heralded my first viewing of my fourth batch of students. With two groups seen into the big bad world over the last couple of years and next weeks Flash Festival saying a fond farewell to the group I have followed the longest (25 months!), I needed new blood to tide me through the next year.

As a first encounter with the first half of this group, it looks as if the quality is continuing into the next generation. The eighteen in this production of Shakespeare's comedy appear to show no lack of skill, even minor roles although often relatively brief were lively and realistically performed.

I knew nothing of this particular play upon arrival and garnered just a little quick knowledge that is was about lost twins and mistaken identities from the programme. Oddly this was enough and for a first encounter with a play by the bard, this was for me the most easily accessible one I have seen. I actually knew what was happening!

Regular University director Jamie Rocha Allan has transported the play to the Caribbean and set the piece to a Deep Ska soundtrack and it works perfectly. Upon entering the theatre, April Lissimore is aggressively trying to sell "I love Ephesus" flags and the cast patrol the area in full party mode. It creates like virtually all the university shows I have seen in Isham an incredible atmosphere.

Picking a few from an excellent cast is tricky, however I do have two definite favourite twins. I absolutely loved Hans Oldham's Antipholus of Syracuse, full of magnificent facial expressions and his particularly awkward encounter with the loud and fabulous Adriana (Jennifer Etherington) was really wonderful. From the other twins, both excellent, I have no hesitation bigging up the live wire that is Helena Fenton as Dromio of Ephesus. A truly magical, physically brilliant and funny performance.

Picking a few others, I loved Olivia Noyce as Luciana, a wonderfully expressive face and a calmly balanced alternative to the larger than life Adriana. Also although smaller in role, I did feel that both Jennifer Wyndham and Rebekah Fowler carried off their beards and lunchboxes well as Balthasar and Angelo, bringing great character into the roles.

It was interesting that no only did I perhaps get this Shakespeare production more than any other before, but I was also crippled by more hysterics than the bard has brought me too before. The scene featuring Doctor Pinch (Chris Drew) was one of the most brilliantly funny scenes you could wish for. Drew in long yellow coat and full on preacher mode, together with the cast, created one of the best individual scenes I have seen from a University show. There were tears running down my face and that I can safely say has never happened to me during a Shakespeare play before.

So yes, an incredibly dynamic and inventive take on this totally farcical tale. This year group looks like it is going to bring more of the same skill that their predecessors have. When that sad moment next week happens during Flash, I can sit back and remember that the torch is going to he held just as high with this new batch of talent.


Performance viewed: Thursday 12th May, 2016 (matinee) at Isham Dark, University Of Northampton (Avenue Campus).
The Comedy Of Errors runs until Saturday 14th May, 2016
Twitter feed for the University actors is @BA_Actors 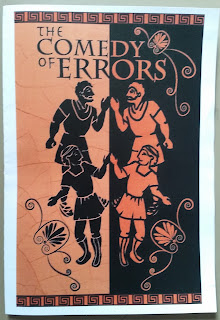