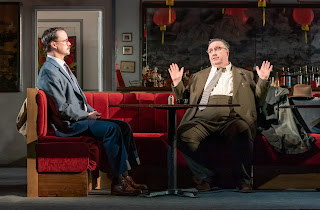 As a theatregoer, there is nothing worse than having a feeling that you are watching something above your intelligence level, a feeling that the words are getting beyond you either at such a pace or for myself with Shakespeare, they are not making a lot of sense. Act one of David Mamet's Glengarry Glen Ross was one of those moments, as the writer and performers deliver fast-paced dialogue, which while clearly more understandable than the great bard of old, leaves very little breathing room for taking it all in. Zone out for one second, like a dog spotting a squirrel and you are back on a hiding to nothing for a few moments trying to catch the thread again.

However, this is all relative, isn't it? One person's attention span or intelligence level is different to everyone else, hence my unworthiness has to allow for the fact that this award-winning play, Pulitzer prize no less, has had remarkable success since its world premiere in 1983 at the National Theatre. 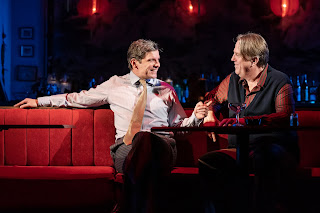 The short and sharp act one, inexplicably set in an unstaffed Chinese restaurant crackles away for just 33 minutes, introducing us to the main six characters of the play, two-by-two. These characters are in some form related to real estate, be they sellers, office staff or potential buyers, and this whole act works as a setup for selling and stealing "leads" (contact numbers for potential clients) and centred mostly around the sale of the Glengarry Highlands of the title.

Our performances in this are a mixture of successes, with Mark Benton's Shelley Levene one of the best, with his nervy and twitchy need to return to the success he has had before driving him to underhand tactics. He is part of the best of the three opening scenes in act one, helped by the fact that he is paired with the best performance this production has to offer from Scott Sparrow, as company man John Williamson. Throughout he delivers his lines in the perfected style of an overly officious office guy, boring and to the point, with some stunning moments of silence as he absorbs the wrath of others. No question the best characterisation of the production. 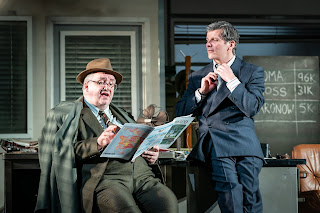 Other than Benton, the second main billing star if Nigel Harman as the main success of the office, Ricky Roma, a ridiculously confident character full of aggression, which spurts out in one single moment, and a ruthless drive to get the deal, no matter who is a victim, here that is the unfortunate James Lingk (a solid performance from James Staddon, in an often observing role). Harman is the most part ok in the role, perhaps less than convincing at times like he is delivering his lines rather than making them the convincing patter that we need to believe he is to cut the deal. He also has one of the more meandering accents, starting his sentences in Chicago, but ending them sometimes in what often sounds like Eastern Europe.

Perhaps the main star of this production though is the staggering set by Chiara Stephenson, morphing from deluxe Chinese restaurant in the first act (acting indeed far beyond it's requirements, it's simply too good for 35 minutes of six actors sitting on the same chairs), and then into the messy real estate office, freshly burgled with paper strewn about. It's one of the best sets I have seen for a touring production, complete with a ceiling as well. This tour also clearly has one of the very best stage crews as well, to turn that all around in just the twenty minutes while we sample the house wine is an incredible feat. 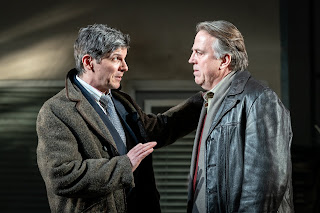 Mamet's script does have its moments and Yates direction does, eventually, once the very static first act is banished. However, you can't help but feel at times that Glengarry Glen Ross is a play best left in the past, it was perhaps of its time like Wall Street was, and I don't think there is any question that in the eighties, I would have also felt the same. Here now though, some of the references are offensive and played too much for jokes in the wrong context, it's very blokey, with little reference to the opposite sex, and just, I'm sad to say, very, very dated, and not in a good way, reminiscing way.

However, it's got some great performances, is slickly presented, and doesn't outstay its welcome. If you want to see a bit of worthy drama, instead of the often superfluous musical offerings, Glengarry Glen Ross might be your thing. However, unless she swears like a trooper, don't take granny with you.