Review of The Girl On The Train at the Royal & Derngate (Derngate), Northampton 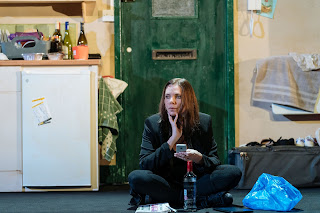 Paula Hawkins' 2015 novel The Girl on the Train was a stunning success, now having sold over 15 million copies worldwide. Having spawned a film a year later, it was perhaps inevitable that it would make it's way to the stage as well, and here adapter's Rachel Wagstaff and Duncan Abel have produced a reasonable stab, albeit missing a little in the thrill department and also exposing a few of the weaknesses of the original novel along the journey.

Rachel Watson on her train journeys likes to watch houses that she passes, and one that is just doors from her ex-husbands has a particular couple in it, which she christens Jason and Jess. When Jess, real name Megan, goes missing though, the alcoholic Rachel embroils herself into the investigation. However, does her memory loses cover up the fact that she is more involved than anyone realises.

What The Girl on the Train does have in its central point is a remarkably strong female role, leaving the stage just briefly between scene changes, the role of Rachel Watson is certainly one that many female actors would probably like to get their teeth into. Here in the role is Samantha Womack, who, while never perfect in the role, she is a little too unlikeable and hard early on especially, gives a solid performance. What is particularly great though about Womack's portrayal, is the demeanour and physicality she brings to it. Visually, she portrays everything needed of the aggrieved Watson, looking on from her dingy flat as what might have been, quick to resort to getting to the bottom of a bottle to cure all ills. 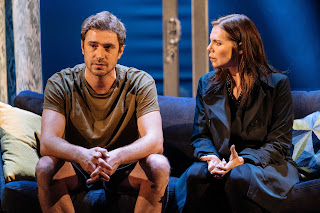 Oliver Farnworth gives a nice performance as Scott Hipwell, husband to the missing woman, leaving the audience (who haven't read the book) totally unsure of his involvement. Indeed this runs across the whole spectrum of actors in this, including Adam Jackson-Smith as Rachel's ex, and Lowenna Melrose as his new wife Anna. They are playing their emotions close to their chest and despite all finding themselves incriminated in Rachel's telling of events at some point, their performances are well calculated to leave you unsure which way the path will lead.

Perhaps the two stand-out performances though come from Kirsty Oswald as the missing woman Megan, everything from her tremendously skilful physical ability in one particular scene, through to the raw emotion of her meetings with the therapist, Dr Kamal Abdic (Naeem Hayat) is brilliant and heartbreaking at times. Really, really well played.

Also superb is John Dougall as the dry humoured D. I. Gaskill, who grows into the best character and shares all of the best comedic moments, and indeed brings out the best of Womack in their scenes together. He is the highlight of the play for me. 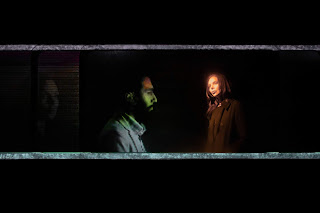 Anthony Banks' direction upon James Cotterill's designed stage is fine, if a little gimmicky at times, nobody needs amusing arrival of chairs in a tense thriller. Also, Cotterill's set is a victim to the same problem of the recent one for Abigail's Party, failing to fill the large stage of the Derngate. Whether this is a new trend of one size fits all going on or not, either way, vast areas of black don't do a show any good at all. However, like Abigail's Party, this would once again have looked perfect on the Royal stage, because the set as it was, was really nicely put together, especially with Rachel's cramped flat looking cleverly like a train carriage. Perhaps be careful of too much background noise of set-shifting behind the scenes which did crop up a couple of times.

Lighting occasionally is a little off at times, which while I am sure is intended to leave a mood to the show, sometimes leaves actors in too much darkness altogether. There are some simple, but nice projections used, especially to depict the train sequences and one for Rachel's particularly heavy night.

There are other issues, it's clear that a knowledge of the original novel probably helps, especially in the first act where things are being put before you in a quicker way than a novel can describe. Also, the original story is perhaps exposed to having some rather curious character motivations when watching it over a shorter length of time. Also, to be honest, the ending is a little unsatisfactory as well for a worldwide bestseller perhaps.

Having said all this, the journey in The Girl on the Train is good, its thriller aspect is a little by numbers, but always entertaining, and anyone who has read the book will probably gain the most from it, as, as book adaptations go, it really isn't too bad.

Occasionally a bumpy ride, but mostly it's worth reaching the destination.
⭐⭐⭐½
Performance reviewed: Monday 22nd April 2019 at the Royal & Derngate (Derngate), Northampton.

The Girl On The Trains runs at Royal & Derngate until Saturday 27th April 2019 before continuing its extensive tour until October.