Review of Flash Festival 2016: What If They Were Wrong? by Two Funny at Hazelrigg House (Studios)

May 23, 2016
Clowns. We hate them or we love them (if you are really weird). I am not particularly enamored really (although I am weird). So a Flash show based around them, what would there be to like? Not a lot I would imagine.

However in the hands of Two Funny formed of Cynthia Lebbos and Benjamin Williams, they are really very appealing. It helps that this is more silly behaviour than strange noses and big feet. This is a sort of Mr Bean situation, but with a modern edge. Indeed Benjamin reminded me a great deal of Rowan Atkinson during the show, full of the awkward social problems, bizarre pulling of faces and tremendous physical ability, literally bouncing off the walls at times.

Both characters are magnificently cute and endearing as their burgeoning romance over reduced bread and cheese slices develops. It helps also that this is the most interactive of all the shows as nearly everyone in the audience gets involved at some point, if only to have their hair stroked or a peg put on it (their hair). There is also a quite stunning scene, the wedding, where half a dozen of us (including moi) are up and part of the scene. Personally my own appearance was a return to my one stage skill of holding something up, as I had the mantelpiece during The Play That Goes Wrong. This time it was a giant papier mache mitre, which was balanced on poor Ellen Shersby Wignall's head as with a rapidly charging accent, she read the service from a scroll.

There are elements of danger in using so many audience members, however this was a very accommodating one, well most of them were fellow students after all. It was again another show that would be fascinating to see performed in front of a relatively standard theatre audience. The choosing of someone to read that extract from Fifty Shades would be a particularly interesting one.

Cynthia and Benjamin are both brilliant and lively in their performances. Quite obviously working really well together and although it is a show that can happily have random things happening, someone falling over for example. It is clear that this has been superbly constructed and rehearsed to perfection.

As is the want of many Flash shows, this does have its social commentary point and this particular one is anger management and is done in the most magnificently unexpected and indeed macabre way. We are encouraged out of our chairs and ushered down into the basement of Hazelrigg, where perhaps the biggest surprise of this years Flash occurs as this show becomes one of incredible black comedy.

It was a heck of a way to finish a most superbly entertaining show. Full of drive and physical prowess from the two performers and a tremendous ease with the audience. Definitely one of the best from Flash this year. 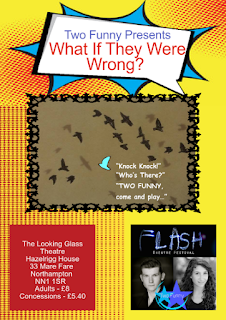