May 18, 2016
Red Inquisition from Memoir Theatre evolves from a theatre groups creation of a play based on the 1947 Hollywood blacklist and McCarthyism

So that I can get it out the way early on and take this review in a more upbeat direction that Red Inquisition deserves, I am going to get a real bugbear done first. There was a huge negative for me from this production and one that I ended up getting negative vibes from. For me there was far too much video and audio footage in this production. Much of it was while excellently researched, surplus to requirements. The were a couple of occasions especially where we saw material repeated on screen that had already been performed. The show did not need this and for me theatre is not about watching a screen in any case, its about seeing performances.

This however does need to be taken as a positive as what I am simply saying is that I wanted more acting from the trio of Daniel Hadjivarnava, Ciara Goldsberry and Jaryd Headley as they work excellently well together telling the story of three involved with the Hollywood list, Arthur Miller, Lena Horne and Charlie Chaplin.

Each encapsulates the very different characters well, with Daniel a suitably dull and boring Miller (how to make that a compliment?!), Ciara a vibrant Horne, with two excellently performed tunes. Finally Jaryd does a wonderfully effective Chaplin. Both Ciara and Jaryd have mimicking pieces against archive footage (and this is where the footage is relevant and appreciated). Jaryd perhaps nails the timing much more successfully than Ciara, whose own piece at a grave oddly is mistimed on occasions.

The piece itself though is tremendously well put together and proves to be quite an educational one telling very well though its short duration the story of the Hollywood list. The development of the play from a group of actors arriving within a newly acquired rehearsal space is clever as is the excellent use of strobe lighting when the actors become the historic characters.

There is much to love about this piece despite its occasional over reliance on original footage. I would really much sooner have seen more original acting as the cast are uniformly excellent. Very much for me a slightly missed opportunity. 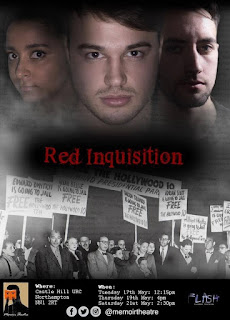