Review of Flash Festival 2016: The Hold Up by Overflow Theatre Company at St Peter's Church

May 21, 2016
The wonderful Caroline Avis welcomes us at the door of St Peters Church. She is in full mime mode, enthusiastic and eager to please. She beckons each of us to our seats. Once we are all happily seated the show The Hold Up begins. This is silent entertainment as Caroline holds up (get it?) cards telling us among other things to switch off our mobile phones. This is going to be a fun night.

However all of a sudden with no warning (unless you have read the pre-show publicity), a group of five armed men and women burst through the church doors. This immediately becomes a different kind of hold up. I imagine now someone who has come to this show without knowledge of it and their reactions, as it is all very real. A moment of real dramatic impact.

Our terrorist captors are Tom Stone (the leader), Suzannah Cassels, Stuart Warren, Amy Weaver and the injured Patrick Morgan, who lays prostrate in the church aisles. Early on we are told that we are safe as long as we stay seated and keep eyes front. Someone who is far less safe is that of police officer and negotiator Rory Sayers. Pretty much from entry into the church he is bound and gagged, and at one point taken away from our eyes and roughed up pretty well.

Tom as leader tries very much early on to be our friend, all fake smiley and personable, if you can be while wielding a gun and holding people hostage. Stuart is the apparent vicious character, stalking the aisle, starring into the eyes of people and very much making them fear for their lives. Suzannah is the medical one and helps treat the prone Patrick. While Amy is the unknown one, one with a hidden past that it appears officer Rory is well aware of.

This, like The End is not a play, but an experience. A story develops through the piece, but for much of the time we feel as if we are within it. That it is very much happening around us. Tom Stone is quite brilliantly and quietly menacing in the leader role, where as Stuart is just menacing. A powerful sinister brooding of a man, who, even if he talks randomly about Game Of Thrones or shares crisps he has found, still exudes a cold menace.

The pleasure of this being a dynamic performance in an amazing space, is that everyone gets a different perspective. One that I had the pleasure of witnessing within a couple of feet was an exchange between Suzannah and Amy. It was simply amazing to be able to see it so close, the whites of the eyes so clear with emotion struck hard across their faces. It was a really magical moment of "theatre" and one that I will remember for some time.

So no question that this is a remarkable piece of theatre, with a piece so rudely interrupted that also needs telling Caroline. Really brilliant stuff and treated with a great deal, and surprising respect from a largely student audience. An inventive new for Flash and really, really entertaining to its very abrupt end. 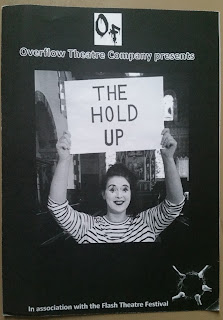