May 17, 2016
Altered from Faux Pas Theatre takes memory as its theme and the possibility that you could be tricked and coerced into a false memory. Its case study comes from the true story of Beth Rutherford and her battle with what she remembers of her past is actually true.

Altered is classic Flash fodder, take a very serious subject, treat with care and delicacy in exploration scenes of quietness. Then all of a sudden throw in some classic and over the top buffoonery. I have seen it done before in Flash many times and for most of the time Faux Pas' quintuple of ladies hit the nail on the head with the balance.

There are quite a few brilliant individual scenes of entertainment, with my favourite the hypnosis one as we switch with perfect timing between the character of Beth (Sophie Rose-Darby) and her taped off council room and the three other actors completing and adding words to sentences in increasingly comic ways. Often including singing in these parts also highlights some very good use of music throughout. This whole scene was delivered perfectly timed.

The story of Beth Rutherford really is quite eye opening and throughout the piece you almost become aware yourself that the old phrase "memory can play tricks on us" is surprisingly accurate. Through coercion, we perhaps could all believe something that never truly happened.

The cast of this group is particularly strong, and from previous shows clearly featuring a number of the best performers from the whole year. Sophie gets the bulk of the substantial serious material to cover and at no point does she disappoint. It is an emotional and very naturalistic performance and the scene towards the end where she doubles as Beth and her father is particularly well played, although while watching I have to admit I was unsure of how well the scene worked. In hindsight, though at my classic day after reviewing time and a mulling over, I now think it did work perfectly well. It was also actually quite a brave decision for a group of five to give such an important and quite long scene just to a single performer and shows that this group really were working together.

Megan Burda had the equally challenging role of being mostly quite serious during the show with little opportunity to join in with the silly antics of the rest. She is mostly solid in the role of the councillor with just a few stumbles at times, which are understandable with the wordy lines. She does however hold the serious nature of the character very well despite some of the antics that are going on behind her at times.

Those antics are performed by the rest of the cast; Aoife Smythe, Ellen Shersby-Wignall and Lucy Kitson; who spend most of their performance in that of a comic role, creating the surround for the serious counselling scenes. Ellen was impressive as the over the top host, all classic shouty and boldness addressing us the audience. Lucy was quite brilliant in her little scene lampooning a piece from "That Morning" helping to cultivate a false memory. Finally Aoife's magic moment came with her surprisingly skilled posh accent, use especially in that fabulous scene where she attempts to implant a memory into Lucy's character, plenty of leg cocking action going on.

The Faux Pas group really have worked well together to create a performance which features much that you expect from a Flash show. Stimulating thoughts in its audience while entertaining with frankly silly antics in equal measure, it is a very entertaining piece. Also where else in theatre would you get to see someone dressed up as a bacon rasher? 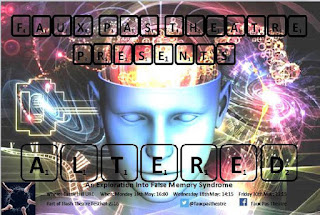