May 19, 2016
A. A. Milne is mentioned in the publicity for NonSens!cal Theatre's 100, Acre Wood, however those looking for a little Winnie-the-Pooh style fun would be suitably shocked by the behavior of this band of four characters and their flat antics. I am oddly not familiar with Milne sufficiently to take the individual traits of the characters, however the play distinguishes them superbly enough in any case.

We have from the outset the apparent outsider, Eddie (Jared Gregory). Sitting alone on a chair, constantly twitchy, who we later learn has been sectioned following the death of his father. His one reminder of him, his harmonica. The others writhe and share an uncomfortable bed upon our arrival into the theatre. We have Rachel (Danni-Louise Ryan), sufferer of the most horrendous OCD, which in this very untidy flat is constantly under attack. There's William (Kieran Hansell), a sufferer of an obsession with food, whose constant companion (and lover?) a squeeze bottle of honey. Finally there is Tommy (Elliot Holden), whose own disorder I did not fully get, but suspected in the area of attentive or anger management, as he was definitely the loose cannon of the four.

I really did enjoy much of this production, as although you could say perhaps the characters were caricatured a little, their interplay between one another was fabulous and helped the whole piece gel considerably. There were a number of both brilliantly funny and awkward scenes; the one where Rachel primes herself for Eddie to declare his undying love for her (and doesn't) it quite fabulous, as is perhaps the best scene where William goes all the way with that bottle of honey. A classic and gloriously squirmy scene.

I am loath to choose any individual for special merit in this one as I really did enjoy all of the performances, creating individual characters all of their own. A poignant and powerful way of dealing with disorders in their many forms and a particularly powerful ending as they all, well nearly all, faced their fears in a positive way. A very well constructed piece. 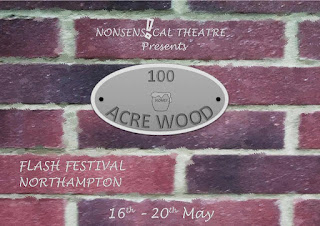