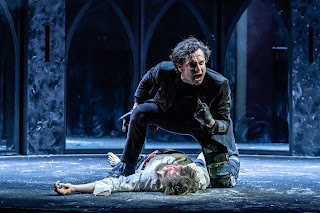 While I would never consider myself anywhere knowledgable about the good old Bard, I did believe I had enough knowledge to know that Richard III was not one of his comedies. However, this totally striking and visually amazing version from Headlong (and co-production with Alexandra Palace and Bristol Old Vic, with Royal & Derngate, Northampton and Oxford Playhouse) ploughs so much dark and brilliant comedy from the situations of Richard dispatching his enemies that you could easily be mistaken.

Richard III is without doubt about Richard, maybe that is unsurprising, however, unlike any other named play perhaps, with this one, others rarely matter. There are no side plots, we have no fool for instance, in fact, nothing much other than Richard and his devilish plotting to power. Perhaps here in this cut version (still 150 minutes including the interval), Richard is, even more, the centre of attention. We don't generally get to know many of his victims much before he is dispatching them. Maybe this is why there is more comedy from the piece actually, even more about him, allows us to become part of his addled mind. He is crazy, but here, he is funny crazy. Many of the lines are emphasised for the comedy, and us the audience also are part of his mind. Richard very much is talking to us, and even more so, we get knowing nods and sly looks direct to us (the moment at the crowning is comic brilliance), leaving the audience laughing as he prepares or has already disposed of his latest victim. 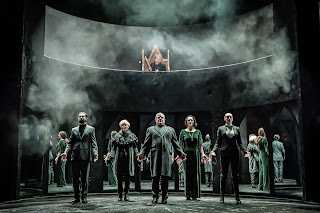 As Richard, Tom Mothersdale is amazing, a crippled form of a body, physically incredible hunched over, left leg braced and foot sideways. The strength of the physical work is stunning in itself. However, his characterisation is also stunning, he and director John Haidar have clearly worked on this to remarkable effect. I don't doubt that much of this is not new, collected from many past versions no doubt, but what it is, in this eye rubbing, twitching, hair and hand wiping form performance, is an amazing beast.

There is much to love elsewhere as well though despite this being all about Richard. There is a truly sharp and calculating performance from Heledd Gwynn as the obedient and trusting Ratcliffe. Elsewhere Buckingham is played strongly by Stefan Adegbola's all the scheming, to begin with, and then panic induced as realisation dawns. Tom Kanji is clipped and business-like as Catesby, dressed in a stylish suit, one great part of the impressive costumes in this modern restyling of the historic tale. 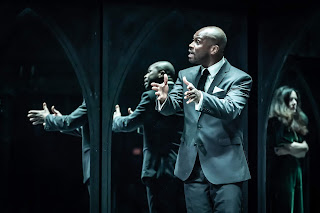 The set from Chiara Stephenson initially gets some getting used to, especially before lights are down, where with the vast mirrors project the images of the audience onto the stage. However, this very much becomes part of the piece in a way much more than gimmicky, as it first seems. They become clear in some stunning scenes where Richard becomes haunted by his victims of the past.

Lighting from Elliot Griggs, and sound from George Dennis is simply incredible and perfectly timed. Visually blood-red lighting as the weapon strikes, flashes of light as heart pain strikes, with brilliant sound effects and topped off by an amazing crown of lights high above proceedings. This is stylish, but never overdone, a perfect balance. 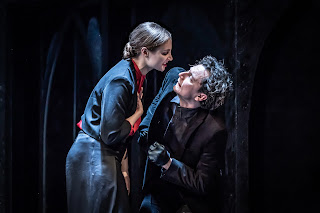 Richard III from Headlong is Shakespeare for a very modern and maybe new audience, a retelling and modelling of something different. Perhaps Shakespeare aficionados might bulk at some of it, including the misplaced first lines for instance. However, that old guard has had over 400 years to experience traditional Shakespeare, the time is to move on now and create Shakespeare as he himself would very likely be doing it now, and here Headlong do just that. Put it in your diary to see it.

Richard III is at Royal & Derngate until Saturday 25th May 2019.