Review of Much Ado About Nothing at Isham Dark (Avenue Campus), Northampton 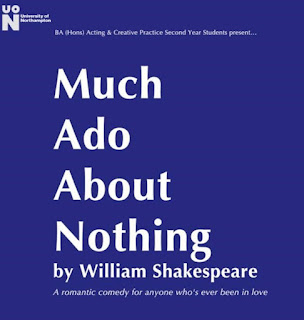 Aficionados of Shakespeare would probably recoil at "The Story" on the back of the programme for the BA Acting & Creative Practice second-year students production of the Bard's comedy Much Ado About Nothing. In short, it refers to Don Pedro returning with his regiment from the Falklands, and stopping off at Leonato's hotel in Greenland on the way. Elsewhere Don Pedro's brother Don Jon is on the lookout for juicy stories for the tabloid newspaper he edits. Claudia has fallen in love with Hero, Benedict says he never will fall in love. Meanwhile, the Sirius Arctic Dog Patrol keeps things in line and Balthasar with her trusty guitar keeps the music rolling.

Yes, this is 1982, and we are in a world of a very different Much Ado About Nothing, and oddly it mostly seems to work.

As expected there are some great performances, even at this second-year stage. There is great style and much more period feel to the ladies in the play than the gents, so Beatrice (Libby Homer-Doyle) and Hero (Lois Gold) have a very eighties feel, both being excellent characterisations.

The gents are a little more traditional, even if their look is not. Keon McDermott is an excellent Benedict, filling the hugely comical role with his own enthusiasm. The scene where he overhears proceedings is buoyant with energy from McDermott, bouncing around the back of all the seated areas and very literally throwing himself into the performance.

I enjoyed also the stately like performance from Jonathan Mansfield as Don Pedro, authoritative as only the leader should be. Leanne Avery was a sharp and stylish Antonia, and Amy Crighton brought superb presence and weight to the role of Leonato.

Elsewhere, Sasha Russell was an intense firecracker performer as Dogberry, and styled magnificently and more than a little scary with a horsewhip (even managing to break part of it with her passion). Lindsay Crawford was superb as her two very different characters of Friar, all refined, and Verges, all wacky and awkward, two brilliantly distinctive roles sharply played.

Finally, Emily Ashberry as Baltazar, transformed into Adam Ant and with guitar, bringing some superb reworked versions of many eighties tracks (how brilliant was Let's Dance!). Her little interludes were one of the best parts of the show, brilliantly performed and cleverly conceived. Fab stuff!

Director Dan McGarry has made the perhaps unbelievable work with this version of the Shakespeare comedy. He gets great energy from all his performers and by the very end as Walking On Sunshine fades away, you feel you have had an extremely fun afternoon.