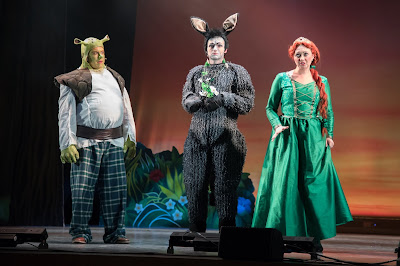 Three and a half years ago, in a land far far away, in a world very different to the one we are now in, I saw the touring professional production of Shrek The Musical, it was a mixed bag of quality, tilted extremely heavily in favour of one particular character (not the one you might expect) and not firing on all cylinders much of the time. One and a half years after my last visit to the Derngate theatre, I return to see the homegrown Northampton Musical Theatre Company's own take on the very same show. Would they be able to breathe more life into the show than the professionals did in that distant land?

It is a bit of a yes and no really. Pretty much all of this is done to the best possible standard, and at times, with being an amateur show you could easily forget, they all have normal day jobs. 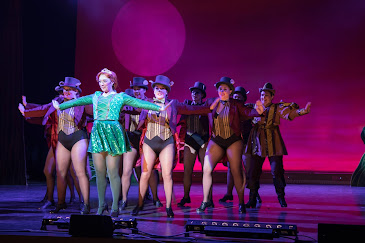 The show oozes professional quality at times. The set looks magnificent, the costumes (from Molly Limpet's Theatrical Emporium) are superb, and as ever with NMTC, the backstage team create brilliantly swift scene transitions, especially given the obvious time constraints on preparing the show. The dragon (given voice by Lisa Simpson), when she makes an appearance, is visually brilliant and well-controlled, surpassing expectations just there for an amateur production. On top of all those magnificent things is Graham Tear's orchestra, filling the theatre with stunning music from his 15 musicians.

Ian Hammond-Stark is the titular Shrek, and for this, his first performance on the Derngate stage, due to illness, he is confident and assured. Sure he has his moments, with a slightly sticky opening to the second act for instance, but other than those brief moments, he gives a brilliant performance, both in character and an excellent, very strong, singing voice. 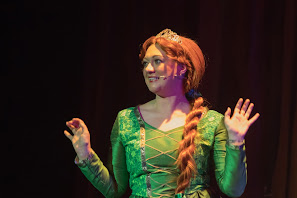 Ashleigh Standage is a delightfully abrasive Fiona at times, showing surprising depth to the character, despite this being generally a lightweight piece of fun. The ever-reliable Luke White creates an excellent Donkey, annoying and sweet in equal measure and his scenes with Hammond-Stark's Shrek are suitably sparky.

Perhaps the best character however is Lord Farquaad, whose very appearance springs laughter from the audience, before even uttering a word. Ama Scuotto clearly delights in the role as well, knowing looks, and great comic timing, all while dealing with the devilish fact he is having to perform the show on his knees. I particularly liked his performance of The Ballard of Farquaad. Brilliant.

As ever through with the NMTC shows, the strongest points are often the full company pieces, and this is the case again with Shrek. Routines like Story Of My Life are the very best in the show, and they make the most here of the catchiest of the songs in Shrek, which for the most part are songs by numbers, just taking many influences from other shows. Nothing wrong with that, but it would be nice for the show to have its own identity a little more. 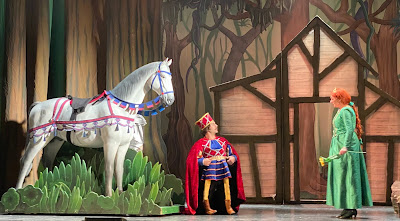 However, it is Shrek, so it never needed to sell itself too hard as a show, it would always pack the theatre on that name alone. The families bring the kids here for a couple of hours of entertainment, and that is what NMTC do with their production, full-on entertainment for families.

The strength of performances create as much energy as they can from the show, and no question that the kids present are entertained from the whole thing and at the end of the day, that is all we all want from a show like this. Shrek is for parents and their children alike, not for a middle-aged reviewer, and you would not be disappointed with a brief visit to this magical land in these challenging times.

Preview of The Cher Show at Milton Keynes Theatre

August 05, 2022
Next week at Milton Keynes Theatre the brand-new production of The Cher Show starring Debbie Kurup, Danielle Steers and Millie O’Connell hits the stage. Running at the theatre between Tuesday 9 and Saturday 13 August, the production features the three actresses portraying Cher in three different ways throughout her iconic career, with Debbie as ‘Star’, Danielle as ‘Lady’ and Millie as ‘Babe’. Arlene Phillips ( Saturday Night Fever, Starlight Express, Grease ) directs the show with choreography by Oti Mabuse (two-time Strictly Come Dancing champion) and costume design by Gabriella Slade ( Six, In The Heights, Spice World 2019 Tour), the UK & Ireland Tour opened at Leicester’s Curve on 15 April 2022 and will continue through to 1 April 2023. The Cher Show  begins with telling of a young child with big dreams, the shy daughter of an Armenian American truck driver, through to the dizzying heights of global stardom. Cher takes the audience by the hand and introduces them to the influ
Read more

July 17, 2018
For the second week running, the Milton Keynes Theatre is overrun by a wave of eighties nostalgia as Selladoor's production of Flashdance The Musical follows hot on the heels of An Officer and a Gentlemen. However, is it nice to have more of that classic decade upon the stage? The answer mostly is yes, despite the fact that the story driving Flashdance is that light and flimsy at times, you just have to sit back and watch the dancing and the bright colours to get you through. Welding genius, Alex Owens, has her sights set for a bigger thing beyond this tired and struggling factory in Pittsburgh.  Hoping to take her dancing beyond Harry's bar, she plans to make big, via Shipley Dance Academy.  Then, also drifting into her life comes Nick Hurley, who initially unknown to her, happens to be the factory bosses son, the scene is set for romance. Flashdance has a generally excellent cast led with a tremendously good performance from Joanne Clifton as Alex Owens. Those famili
Read more

Review of Constellations at the Church Of The Holy Sepulchre, Northampton

April 08, 2022
We have all; I am sure, said something that we instantly regretted, or in a tone that we felt could have been better, and this interweaving and fantastical play Constellations , written by Nick Payne, explores the ways one relationship can be affected by just simply saying and doing something in a different way. Payne’s play is an immense achievement in the clever scene and character creation, and over one-act, leaves an impact rarely achieved in such a short space of time. It is simply a two-hander play charting a relationship over an initial meeting at a barbecue to, well, you will have to see the show to find out where. However, the clever structure actually gives us a glimpse of the end of the play in the second scene, as this play uses parallel universes and bends time throughout. Masque Theatre, like a lot of productions of this play, has different actors performing this play, and the evening I saw this, Brooke Gillingham and James Lickman were the actors portraying the character
Read more