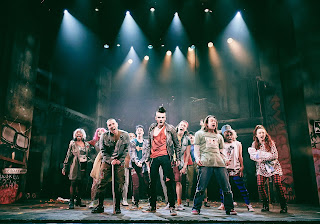 As the audience take their seats for Green Day's American Idiot, a television screen drip feeds snippets of media coverage of both the 9/11 terrorist attacks and President Bush's subsequent war on terror. It's a significant part of the storyline that follows, although the story of disillusioned youths attempting to find themselves is nothing new.

These three particular disillusioned friends are Johnny (Tom Milner), Will (Samuel Pope) and Tunny (Joshua Dowen). Johnny and Tunny drop their homes in pursuit of "finding themselves" in the city, while Will has more homely issues dealing with his now pregnant girlfriend Heather (Siobhan O'Driscoll). 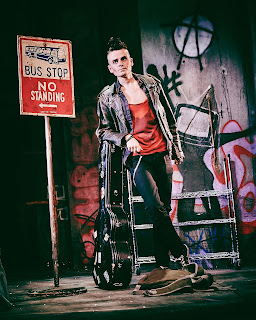 It's a strong enough story to create a show around, and with Green Day's remarkable lyrics on American Idiot (and a few extra choice songs in the second act), it proves affecting sometimes in a surprising way. The first act is unquestionably the strongest, the best first act I have had the pleasure to see at Milton Keynes actually, the best songs are here, and the best pieces of choreography are also. This is often where the strength is on this show, in the musical set pieces.

Racky Plews, who both directs and leads choreography has created some vibrant pieces full of energy and it's amazing at times that the cast can maintain it for the entire show. The choreography is neat in that it feels perfectly in keeping with how these people would dance, full on rugged, and almost possessed at times, and weaving sexual acts into them at times, it both amusing and at turns probably leaving you grateful you are not sitting next to your gran. 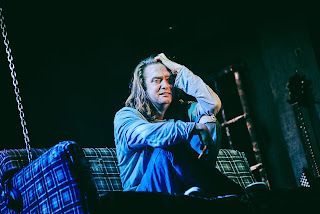 The three leads Milner, Pope and Dowen are all equally strong, capturing their characters' emotions extremely well. It is all broad and exaggerated in its style as is keeping with the power of the music itself, so, there is little room for calm, and indeed when calm does come in the second act, as Milner's Johnny totally stops the pace of the show with his hard-hitting drug scene, it comes as so much more of a shock.

Dowen deals with Tunny's story with as much emotion as he can muster from what is virtually devoid of dialogue, he and the other leads force their actions through the lyrics of the songs as much as they can, and much of the time it is very effective. So, while more dialogue might have been beneficial at times, it also, as a result, would have broken the drive of the show, so, perhaps here the writers have got it about right. 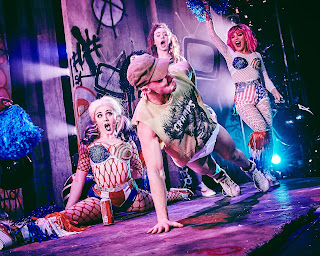 Luke Friend as St Jimmy, is one of the pre-requisite nowadays it seems, an ex-X-Factor contestant, and he is both strong and weak, he has huge strength in the powerful numbers, but the softer moments of the songs he performs are lost within the music at times. Another X-Factor contestant though is much stronger, Sam Lavery as Whatsername is tremendous, remarkably powerful voice, one of the strongest in the show, and so incredibly effective in putting raw emotion into her performance.

The collections of songs are at their best in act one, the weaving Jesus of Suburbia is a stunning piece of evolving music over nine minutes, and the style changes put into the musical arrangement are amazing, including the haunting moment from O'Driscoll. Milner's delivery of Boulevard of Broken Dreams is also another highlight, as is Wake Me Up in September, the best moment of act two. 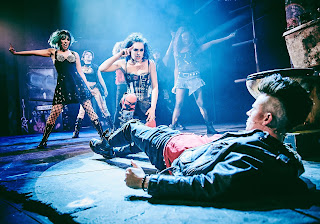 Sara Perks has designed a typically dowdy and dingy stage, which never moves through the show, with scene changes from props and windows of opportunity, a neat Rupenzel like appearance of Whatshername is extremely clever staging. The band occupy the upper tier and bring tremendous music to the entire show, and while you might expect it to be too loud, it never is. It's nicely balanced.

American Idiot was a surprise, I don't think it is for everyone, despite the surprising fact of how varied the audience was. It's perhaps one to chose your companion carefully with, but in equal turns, it's also maybe for all generations. It's rude, crude, abrasive throughout, but it's also tremendously good. It's more than just a rock concert bolted onto a thin storyline that you might be led to be believed by some, and from me, there is no question it comes highly recommended, if only for that quite stunning first act.


A stunning sensory overload of both brilliant music and choreography create an amazingly strong show.
⭐⭐⭐⭐½