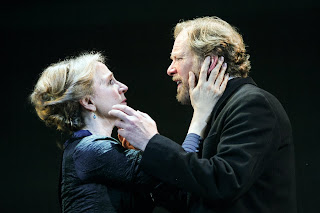 I was very much looking forward to seeing the new Made In Northampton version of Henrik Ibsen's Ghosts, as I had heard on the grapevine nice things about the early previews. Maybe my hopes had been raised too much?

Widow Helen Alving is about to dedicate an orphanage she has built in the memory of her late husband, Captain Alving. However, with her son Oswald home after her having banished him away from the family home for his own good, and Pastor Manders visiting on a rare occasion, hidden stories of the past, ghosts, come to bear changing life in the Alving house forever. 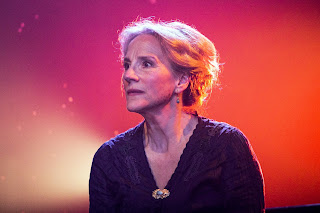 Ibsen was very much a forward and often controversial thinker with his plays, and here is no different, this is challenging and controversial material for the time, and indeed even now the morals held within have great bearing. It's clearly a brilliant play, however, there are too many issues with this production to make it a perfect version.

The opening scene is a tough one to get into, a confrontation between Regina Engstrand (Eleanor McLoughlin) and her father Jakob Engstrand (Declan Conlon) is awkward and slow and doesn't help the story get going. You want Jakob to be more intimidating that he is, he is so out of place in this environment, that he should truly feel it, and this rarely comes across. Also, McLoughlin as Regina really feels poorly created, in the opening scene, too boring to help the play get started, then her later final scene, overly stylised character, it grates and feels wrong. It is though maybe the only criticism to throw at the performers here, and it might be a criticism for the director more than the actor. 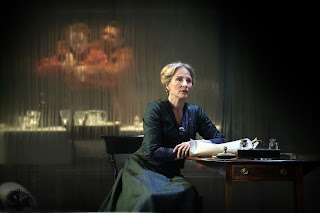 Elsewhere there are superb performances, which despite the first act being played at a stilted fixed pace, brings great moments of drama. The confrontation between Penny Downie as Helen and James Wilby as Pastor Manders is remarkable, and here you can see why both Ibsen's text was so controversial at the time, and now it is even more so, as it all elicited gasps from the audience. It's true that Downie provides one of the better performances on the Royal stage for a while, portraying often just visually the inner turmoil as secrets spill out. Wilby equally impresses, although I think he has more to offer and was at times a little hesitant with his delivery, including one quite obvious fluff. This performance though I suspect will bed in more in future shows. 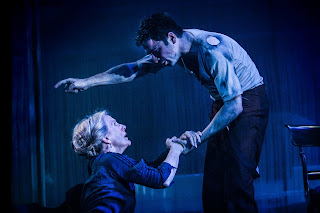 The breakdown of the family is tremendous, and Pierro Niel-Mee is brilliant as Osvald Alving. A spiralling mess of a person as he confronts both his own health and through Downie the effect of the sins of the father. Their final scene together is gut-wrenching.

So, while, the acting is all generally excellent, the two acts feel disjointed, the first at a fixed pace, which thankfully is the shorter of the two, so, passes relatively swiftly, however, the second, while better paced in rhythm, with some nice pauses, feels much slower in comparison and fails to deliver often the tension it should until the final scenes. 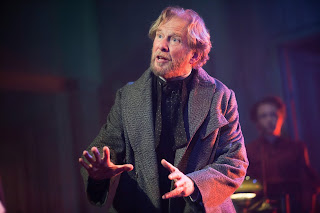 The audience also was a curious bunch, as ever for guest night, laughing at moments that totally felt wrong, but it was so hard to tell whether the production was looking to add this humour into places it wasn't needed, to try to make some point. I felt much of the second half in this audience uncomfortable as a result. 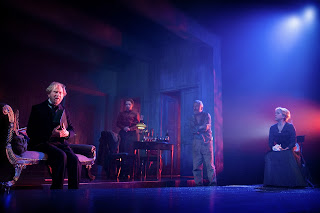 What grates most though with this production is all the need for symbolism within Mike Britton's design. The set is cramped beyond belief on the Royal stage, sure, probably to offer how claustrophobic life is becoming. However, all it ends up doing is making the whole play a nightmare for the performers as they have to navigate tiny spaces. The garish colouring of the walls offers nothing other than I guess, more symbolism of the home in the depths of the fjords. Then we have the coup de theatre moment, which I guess offers more symbolism of the break up of the family, but just feels like a trick they want to pull off because they could. All it results in leaving is a rather awkward step up and down for the actors to deal with, leaving the rest of the play a little odd to watch, as feet disappear and reappear as they move around. It's a shame, as I have absolutely loved Britton's sets in the past, but, for me, I feel too many ideas have been used to the detriment of the production.


I wanted to like Ghosts more than I did, and performance wise, it is mostly a cracking piece, with Downie, Wilby and Niel-Mee in blistering form. However, many of the production ideas often get in the way of getting a true feeling that this is the actor's piece, as it should be. It is still a great piece of theatre though, I just feel that this was so close to being a superb one.

Too many ideas often get in the way of the superb cast showing what they are capable of doing.⭐⭐⭐½Performance reviewed: Wednesday 24th April 2019 at the Royal & Derngate (Royal), Northampton.

Ghosts runs at Royal & Derngate until Saturday 11th May 2019.