Review of Flash Festival 2016: The Show Must Go On by Lead Feather Theatre Company at Hazelrigg House (Studios)

May 20, 2016
Much like Sell-By-Date in 2014 took death in it's many guises and made a dark comedy with wonderfully dramatic moments, The Show Must Go On takes cancer and creates a piece much like that Flash classic.

Devised by Penelope May, Jake Rivers and Madeleine Hagerty, who between them are Lead Feather Theatre Company, this is without doubt the most emotionally dramatic play of the week. It centres around Alice (Penelope) and an illness that we eventually learn is cancer. Around her are her brother Ed (Jake) and her friend Sally (Madeleine). The piece is handled with a deft and adult style throughout much of the play as Alice's condition worsens.

There is also a tremendously strong subplot as well with a husband and his cancer affected wife. The husband played by Jake delivers a particularly brilliant and challenging stand-up rountine (shades of Sell-By-Date once again) that builds from guilt laughter from the audience to eventually silence as the tone of the jokes deftly changes. It is for me one of the best scenes of the week.

Less successful for me, and this is very much a style opinion, rather than a criticism, is the doctors scene. I can fully understand the reasons behind the piece as it offers opportunity for very funny moments, and to be fair is very well played and performed. However it does for me jar dramatically alongside the really intelligently played out scenes featuring the Macmillan nurse. I totally get where this scene is coming from, it just didn't work for me.

What did work though is the really strong building undercurrents of sadness. When we get to the final scene as Madeleine emotionally belts out Queen's title song and Ed and the nurse literally pack away Alice's entire life in the background, I am happy to say tears had arrived. Such is the nature of the piece through the stunningly subtle performance from Penelope and her family and friends, you almost at end feel as if you are one of this family.

I am very fortunate to have never lost any family members to cancer, but even with that being the case, this at its most basic is about death. The loss of anyone will be felt while watching a show like this. Indeed even those in the public eye who are highlighted during this piece are enough to make an impact on people. We have lost many to cancer this year, and this play speaks for all of them and therefore leaves an impact on absolutely anyone who gets to see it. 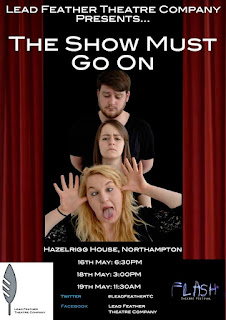