May 17, 2016
Just Bear Theatre Companies Him tells the story a chance meeting between Happy and Issac

The above I got from the description of the show online. After seeing the show, I have to admit that I am still a little confused as to the main subject matter. What is clear having seen Him is that this is more of a standard play than you tend to expect from Flash. There are less juxtapositions between stimulating serious and comic content, there is little choreography movement and physical theatre, there is little tech. This is a play simply telling a story and perhaps therefore fails in what you generally expect from a Flash production. What is does, is well performed, what is says though is far less clear.

It gets off to a very bad start though as Happy (Jack Alexander Newhouse) is exchanging conversation with Her (non third year actor Jemma Bentley). Jack does the most heinous thing in a theatre production in an acoustically challenging church and performs much of the opening dialogue with his back to the audience. I have seen shows in the round of the Holy Sepulchre and this can be excused, however here in St Peter's the audience is all in one direction and there simply is no excuse for it. I personally heard most of the dialogue although at times it was challenging, however I was in the second row. I know others did struggle.

What this play does do though is use the church space well to perform the production. With the play actually set in a church, use of aisles and the door itself to herald the arrival of Isaac (Neizan Fernandez Birchwood) is impressive, giving an atmosphere perfectly as we the audience sit within the actual set.

The story though I have a lot less understanding of. Perhaps it is my fault, I am being dense (although having spoken to others who thought the same, I don't think I am). It is clear that this mysterious stranger is known to Lucky, however I don't think this ever totally becomes clear why.

Then we have Her. After the arrival of Isaac, Her is no longer Jemma, but a blowup doll. This offers much hilarity for the audience, and offers some entertainment (occasionally in the awkward way). However I genuinely didn't quite get what it represented. My first and pretty much only thought is that it represents how lonely Happy has become. He has created a fictional partner to spend his time with. This is the general thought for such a thing.

However does it work like this within the play? I just don't think so. What mainly doesn't work is that Isaac seems so willing to play along with it. I have no idea why he would not mention something like that pretty early in a meeting. So that is the main sticking point of the whole play not working for me. Then we have the moment that rather inexplicably Isaac one night sees Her in human form again, or appears to? That really did leave me puzzling.

So I hope to be told exactly what was going on and my apologies for not quite getting it, if it really is rather obvious. It was all very well performed despite a few issues and I do congratulate them at the very least for completing this rather strange little play without corpsing at any point. So that without a doubt is a credit to the professional performance from the duo. All rather strange indeed.

The Flash Festival 2016 runs between Monday 16th and Saturday 21st May, 2016 at four venues across the town. Details can be found at http://ftfevents.wix.com/flashtheatre2016 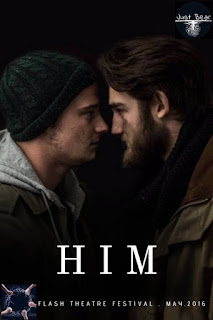