Review of Deckchairs 2 at The Playhouse Theatre, Northampton

May 27, 2016
I never got to see Deckchairs as it was performed at the Playhouse in 2014 two shows before I discovered the place. Therefore I was coming to this follow-up cold. However this is not a sequel in any case, just another play of four totally unconnected plays, they are two handers set on a seafront or beach of some kind. None of them are thankfully performed on those impossible to put up traditional deckchairs.

The style of the four plays varies, with two serious pieces of drama in the centre, book ended by two outright comedies. It forms an interesting, and not totally successful package. Written by Jean McConnell, these are quintessentially British feeling plays with often broad brushstroke and caricatured characters. The quality of the stories varies with by far the stronger ones after the interval and this is surprisingly replicated to a certain extent by the performances themselves.

The opening play is titled Day Trippers and is a relatively lightweight tale of a trip of two coworkers on a work outing. This is broad and very obvious humour, not unfunny but most jokes visible a mile off, think seaside postcards or Les Dawson sketches. Featuring Sue Howes (Doris) and Ingrid Heymann, it is the most shakily performed, with on the night quite a few prompts distracting from the content. Despite all this, there was some nice interaction between the two and it remained a very entertaining piece.

The second play, The Guilt Card is at first a startling change of style and is the one I had the most trouble enjoying. It does tell a very good tale of two sisters and a revelation that throws the younger ones world upside down. The problem I had with it was that you simply could not like either character. Its great to hate a character, they are often the best ones in a play, however when you have only two in a show and you have sympathy for neither, for me it is always going to be struggle to enjoy. While of course, much of this is the scripts fault, I personally would have liked to have seen a slightly gentler approach to the character of Marion (Jen Kenny). At times the performance seems forced in making the audience hate her. With her illness, this is where the audience could have benefited from a little less grimness, and been able to sympathise with the character more. I did however absolutely love the moments where Jen gazes out into the sea contemplating, these were certainly full of emotional depth. One thing I must say though is that Sheila Jenkins in the role of Deborah was extremely impressive in her very first performance and certainly has a future on the stage ahead, a quality debut! So The Guilt Card is definitely well performed, just a tad heavy on the overall harshness of the characters.

After the interval we have the second of the serious plays, Short Changed. This for me was not only the most interesting story of the four, but also the best performed. Miss Westlake (April Pardoe) wants to move into a retirement home and the decision lies with Julia Griffith (Corinna Leeder). However as the story develops, it appears that these two apparent strangers may actually have a history. Corinna once again provides a solid performance as Julia, all building tension as the mystery of Miss Westlake becomes clear. However it is April that is quite a revelation in this, greatly out of character from anything I have seen her perform before. She is a simmering presence, while not moving from the chair, she always feels a foreboding and strong character. Much like Swan In The Attic was a development of confidence, this is perhaps from those shows I have seen, the best realised character I have seen from her.

The final piece is Theatrical Digs starring Denise Rye (Maggie Feston) and Gena McCrystal (Pascaline Holbien) and this is an all out riot and full of in jokes for those theatre folk. Both characters, dressed in larger that life bohemian style are magical creations, with the bravado in particular of Pascaline, clutching her "Born to be famous" the early dominating factor of the first part of the play. It is effortlessly performed by Denise and Gena and the most clinically so of the four plays allowing the two to create the two exuberant characters with no distraction.

Deckchairs 2 is a mixture of the excellent, good and slightly disappointing, however because they are all relatively short, even if you are not quite enjoying it, there is always something very soon around the corner. It was however once again a great evening of entertainment at the Playhouse.


Performance reviewed: Saturday 21st May, 2016 at the Playhouse Theatre, Northampton

Deckchairs 2 ran at the Playhouse Theatre, Northampton between Tuesday 17th and Saturday 21st May, 2016.

For full details of the Playhouse Theatre visit their website at http://www.theplayhousetheatre.net/ 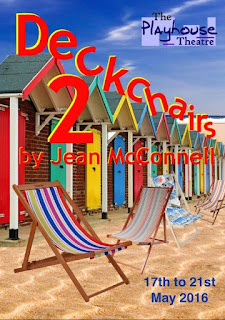