June 05, 2015
As the walls of the Royal & Derngate prepared to shake to the tunes of UB40, I settled down in the more sedate environment of the NN Cafe for some storytelling and got... bagpipes! I hate bagpipes. However I stuck it out and didn't flee in the direction of Red, Red Wine.

I am glad I did as thankfully our Feast Of Fools resident host Richard York swiftly ceased the torture of the air bag and the storytelling began. We were given a welcome and indeed as the ringing in my ears had stopped, I was able to hear that a certain highly educated reviewer was referenced in the opening speech. Our host also provided us with a aperitif story before the introduction of the guest of the evening.

The performer of the evening was the bow tie and tails donning Tim Ralphs. I had seen Tim once before in the Underground presenting a Norse inspired piece (review here) and an informative after show Q&A. This time we had a little more Q&A and a performance of his storytelling piece Rebranding Beelzebub.

This tale is formed of many tales weaved around a supposed (or is it) meeting with the devil in a supermarket, Morrisons in this case, although other supermarkets are available. The snake form of the devil ends up going home with our storyteller and has a resting spot on a table, which very importantly is not made of glass (research since has so far suggested that snakes simply cannot move on glass, although I haven't yet found anything about it being painful).

The whole piece a touch over the hour is a constantly inventive piece which gives a nice variety of tales, mostly of course featuring the devil in some form. Our teller is also an immensely smooth deliverer of the tales, not theatrical in this case, but more a "let me tell you a story" teller. I have learnt so far that these tellers like all things, offer a huge variety of styles and Tim Ralphs is no less fascinating because it is less showy than some. There is indeed room for all types here.

The following Q&A was once again an interesting affair as those assembled offered quality questions and chat pieces. These included the origin of the devil and the fiddle, which did remain unconfirmed during the show, but left many open to research further (I haven't looked at it myself yet). There was also a great moment of sitting painfully upon the fence by Mr Ralphs' as one chap had a challenge for him over whether he was superstitious. Again it was great part of the evening and I do enjoy the Q&A parts of any shows often as much as the main show itself, so I always do now seek them out.

It was a wonderful evening and one of my favourites of the storytelling so far as the modern age setting felt more interesting to me than some of the fantasy and mythical elements we tend to get. I have to say that I am getting into this storytelling lark. The crowd of enthusiastic listeners are wonderful and super friendly and it was nice to see the crowd back in the bigger number again, and like I said before I hope that more return for the open mic version again in July. Although not too many, as I can see a pattern of raffle failure emerging when the crowd is large 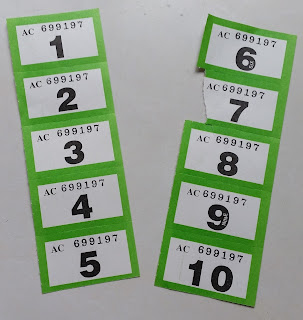 Feast Of Fools is held on the first Wednesday of each month at the NN Cafe, Guildhall Road. There is a Facebook group at https://www.facebook.com/StorytellingFeast and they are also on Twitter @FOFStorytelling