Review of UoN Fringe 2019: Welcome To My World by The Realistic Theatre Company at The Platform Club, Northampton 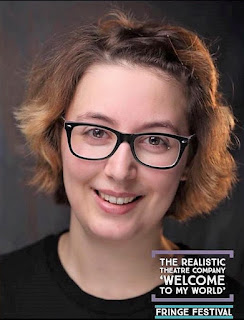 For my second show of the 2019 University of Northampton Fringe Festival, it was a head-first dive into mental health (and this was not going to be the only show exploring themes on this during Fringe), and Amy DaCosta's Welcome to my World from her company The Realistic Theatre Company.

This particular take on mental health was exploring Dissociative Identity Disorder, which was not one I was aware of going into the show. However, over thirty minutes, DeCosta went some way in helping a little to understand this, it is as it turns out multiple personality disorder, and here DaCosta explores a woman that has several hidden people while embracing as much as possible her real one of Zsofia.

Welcome to my World is at times, and maybe deliberately so, a little confusing. As the characters become dominant, while DaCosta's characterisation is very different, the stories they tell can take some following, and indeed a discussion after was the only way to get a grip on certain aspects of it. However, perhaps that is very much the point, not only to generate talk, but also to confuse and make the audience member a little insecure about events, like the character herself.

DaCosta, however, is a strong performer, clear in delivery, and some nice vocal and visual tones to create the different personalities and to tell the tale, in a storytelling form, a method I am a great fan of, and here, she exhibits a great future potential to move into this field if desired.

Staging is simple but also features some excellent use of a table to create various objects and locations. Tech is nicely handled, including some great use of pre-recorded audio, which is accurately performed within by DaCosta.

Welcome to my World is difficult to watch, it should be I guess, and the life of Zsofia is a tough one, and here with the show, there are unfortunately no happy endings. However, life doesn't always provide that, so, perhaps theatre shouldn't always either, and that maybe makes this show stronger for not providing one and leaving us thinking of the issues raised all the more.