Review of UoN Fringe 2019: Mein Hodenkrebs by Light in the Dark Theatre Company at The Platform Club, Northampton 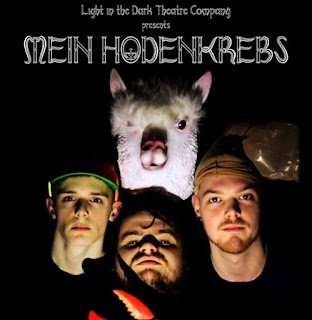 Having seen in excess of 70 University shows through Flash and this new breed, the Fringe, I have to say that I have enjoyed enough of all but one of them, to make them worthwhile, and to judge them a success, even if just one for ambition. Mein Hodenkrebs from Light in the Dark Theatre Company is a struggle though, but it does show immense promise at times, but unfortunately, that is mostly all on the big screen.

Mein Hodenkrebs means My Testicular Cancer and is a comedy set in the body of Zak, a student whose world turns upside down with the news that cancer is riddling his body. That cancer here manifests itself in this play in a series of bizarre attempts to create political satire as characters like Boris and Theresa battle it out in Zak's body. Some of it works, the rectum scene, for instance, most of it feels hard work to watch, and irrelevant to the show.

Our performers. Ben Loftus, David Wallace, Giacomo Galbiati and Kyle Lawson are good enough, throwing themselves into the material, perhaps too much. It is just that the material is so poor at times, they can't really make it interesting. Then is a ridiculous franticness to the whole piece which leaves it with no control, the voices a lot of the performers adopt become too screeching to become clear enough to hear the dialogue, especially in the acoustics of the venue (something they should have observed more perhaps). It is all a bit of a mess, even if Gollum really is rather well done.

However, that is the live action scenes, a good part of this show, maybe fifty per cent (even if it feels less at times, due to the excessive nature of some of the live scenes), is taken up by a Peep Show style video. This is where we see the world of Zak outside his body, and this material is nearly 100% better than the live action. In fact, much of it is brilliant. 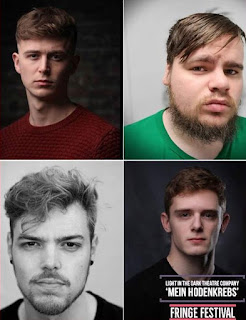 The characters are well rounded, interesting, and the whole piece is brilliantly put together. It runs the full path of brilliant comedy, stylish filming and has a true heart in its story of Zak and his brother truly is brilliant. The landlord scenes, although irrelevant mostly to the plot, are also huge fun and performed with full commitment, I'm glad I wasn't in the Aldi car park or that street at the time of recording. The opening piece to the music of ELO was pretty much one of the best-pre-recorded scenes I have seen on these shows, superbly cut, and shows that these guys have tremendous talent at film making first of all, but also writing good material. It is just a shame that for the live scenes, all quality control went out the window.

I don't like writing bad reviews, and with the University shows I hate them more, and fortunately rarely have to write them. The live material here reminded me far too much of the disaster that was 2015's The Secrets of Man (also a cast of four men interestingly), however, they didn't have the video footage to save the situation. Here at least, it's cast prove that they are better than this, it is just a shame they didn't show it all the way through the hour performance.