Review of UoN Fringe 2019: I Believe by OVM at The Platform Club, Northampton 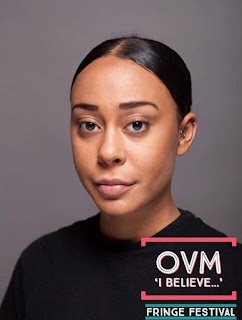 It is sadly true that even back in the '90s when I was about the right age to do so, I wasn't one for busting the moves on the dance floor. Therefore when I received the advance email for this show that we were requested to wear black, bring I.D. and come to paaaartey at The Platform, I welcomed it with a lot of trepidation. However, I need not have worried too much as I left most of the moving to the other students in the audience and my esteemed blogging colleague Mr Chrisparkle, who attempted some moves of his own and looked far more the part.

I Believe from OVM - Our Voices Matter is performed by Na-Keisha Glenn in two main roles, and ably assisted by a number of other actors including Rosemarie Sheach mixing on the deck as the brilliantly introduced "token white girl". It tells the story of an innocent wannabee singer from Leicester and her pursuit to make it big from a meeting with R. Kelly, who inexplicably, is coming to Northampton. 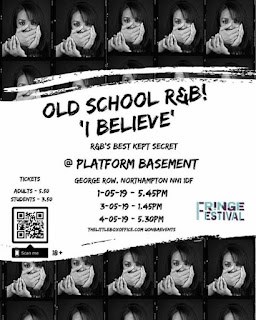 It doesn't take much to realise where events will spiral at the mention of R. Kelly, and although they do eventually get there, in emotionally charged scenes, the buildup and atmosphere itself it as much part of the show as well. We are greeted and vetted for our right to enter by the no-nonsense nightclub manager (Glenn), and given complimentary drinks (this is a Lambrini rave) before being suggested to make them moves on the dance floor. This is all crisp and atmosphere building material, but we know something is going to happen, and that happens with the arrival of our girl from Leicester.

Glenn is great as Lisa, innocent and with a desperation to get what she wants, maybe more likely, needs. She has a great voice as she reveals what she will sing to Kelly, unsurprisingly I Believe I Can Fly, and she gets the chance, and we all know now the path that will take.

There are some truly uncomfortable scenes in this, where we are not sure whether we are meant to or should intervene. Of course, we shouldn't, it's a play, a "reconstruction", but perhaps that lack of intervention does tell on the fact that someone, earlier, should have done something.

I Believe is powerful stuff, made better by being an "event" rather than what might have been just a relatively dry account as a play. This is what the Fringe is all about and fast becoming, the best plays are the ones that think outside the box more, and this one does, and as a result, is one of the best so far.