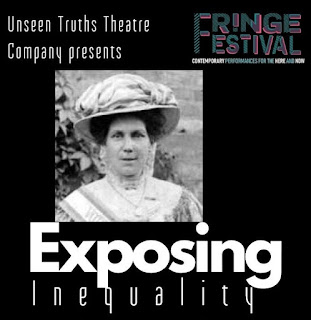 Performer Jessica Harding opens her Unseen Truths production Exposing Inequality with a direct monologue to the audience where she explains that this is a show about, unsurprising, inequality, much centring around that vital turning point, the Suffragette movement. In this opening piece, she says something along the lines of this isn't just another boring show about this subject, and her intention is to make it all the more different. It is a dangerous thing to promise something like this, as it sets out all sorts of hopes for an excellent show.

Sadly this genuinely entertaining opening, spirited and enthusiastic delivery from Harding, is pretty much the best part of the show. Although, Exposing Inequality is far from no merits at all, as there are some excellent ideas here which just needed a little more refining to make them work.

The bulk of this show centres around Leicester Suffragette Alice Hawkins and takes her job in a shoe factory as another idea for the play. Throughout the play, across the front of the stage are several pairs of shoes from through the ages, and these provide an inventive, but not totally successful, theme for the show.

Alice's story is fascinating, most Suffragette ones are, and Harding is excellent in the role, nicely judged, and innocent enough initially to let the boldness grow in her as she gets older (starting point of 7 years old) and her involvement grows. The shoes are the guiding light for the piece and as well as costume changes, tell us where we are within the story. 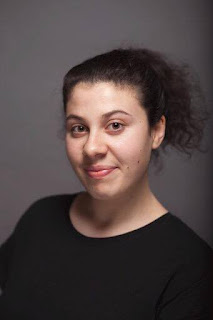 However, one particular scene where the shoes are used, while extremely clever in idea (Harding wears the shoes on her hands to represent a conversation at a socialist event), is poorly executed, causing delays when Harding is standing up and sitting down. A possible solution to this issue would maybe have been to have performed the piece on a raised table, making it both easier for the performer and audience to see.

There are a few other issues as well, there is a nice physical piece used during the play, but it becomes repetitive quite quickly and is repeated once again later to much less impact as a result. Other ideas would have provided much more depth and freshness to the show. Other issues are apparent early on when far too much detail is gone into, and too much dialogue, the statistics scene, far too early in the play as well, is both dry and sadly therefore boring, and also the addition of the BBC reporter Carrie Gracie's resignation is excellent, but we definitely didn't need the whole speech to prove this point. Also, a relatively minor observation if the show was to be performed again, during the socialist scene where the ladies are surprised by the appearance of a man at the event, a picture projected at the back is of an office full of men!

All of this sounds rather negative, and I guess it is, but Exposing Inequality has a good foundation of material, and some excellent ideas, however, sadly much of it is either underdeveloped or in need of tightening up to make it a great show. Performance wise, Harding is a good performer, personable and great to watch. It is just a shame that unfortunately there were a lot of issues with much of the material within this show, it was so close to being so much better.