Review of UoN Fringe 2019: Can't Quite Hit It by Rumble Theatre Company at The Platform Club, Northampton 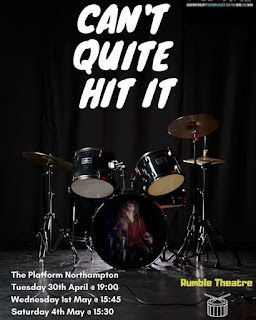 One of my favourite films is the 2014 Whiplash, it revolves around drums (one of my favourite and often disregarded instruments) and jazz (one of my guilty pleasures, the Marmite of music indeed). Can't Quite Hit It takes drums as it's theme, and at times has a little of that film about it as well. Maybe it is therefore not a total surprise that it ended up being my favourite show of the Fringe week, and one of the top University shows I have seen over six years.

Bias doesn't come into it though, as performer Rosemarie Sheach has created a top-notch show from her Rumble Theatre Company, superbly and endearingly performed, that non-drum fans I am sure would enjoy as well. It's more a chasing your dream story as Leah, an aspiring drummer, seeks out fame and more importantly the ability to do for a career what you love, and not have to be a team leader at KFC instead. You could replace drummer for any number of things to make everyone in the audience feel the passion in this show, and that is why, beyond the excellent music, this perfect little show would work for all.

Sheach is a captivating and intensely likeable performer, who makes even the bad guys like the troll-like drumming enemy Rob, a delight of huge comic proportions. All the characters in this piece are very broad, deliberately overplayed, but it suits not only Sheach but the piece itself. It is a show simply brimming with fabulous characters and moments, delivered with a passion and more than a lot of skill. 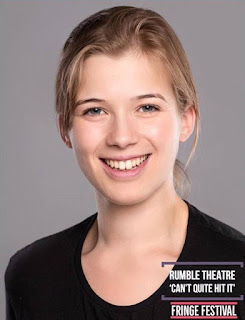 And this is all before the music and the drumming comes into it, there are several musical interludes of brilliant music selection and drumming scenes of course, and they are exceptional, and in the depths of The Platform basement, all the more intense and realistic that you are in some nightclub, which I guess we are of course. Sheach certainly has some skills regarding the drums, and that enhances so much this show beyond a good one, to an incredibly brilliant one.

It is tough to say how much I was enthralled by Can't Quite Hit It, except to state that after having seen 70 odd Flash/Fringe shows, this was only the third that I have been moved to stand for. If I had seen an earlier one in the week, there is no question I would have been back to see this again. Brilliant stuff!