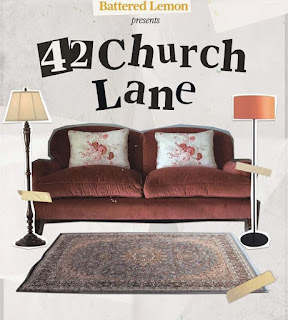 42 Church Lane from Battered Lemon Theatre Company was the sharpest written story of the week at the Fringe, a brightly clever tale of three groups occupants of the titular address. It's also lovingly performed, and despite the longest show of the week, never boring or outstaying it's welcome.

We meet our first occupants of the address in 1941, as the resident family welcome home Arthur from the war, returning due to injury. Flash forward to 2016, and Megan and Jamie have moved into their first house together. Finally, 2027 sees its occupant Doctor Mia opening a clinic to administer the MMR vaccine in the face of the newly privatised NHS.

Each of these three worlds is, in theory, unconnected, but as storylines develope through a strong and totally coherent scene-switching way, it becomes clear that the underlying theme is very much that of trust, and in the end, the betrayal of it.

Each of the performers has multiple characters and they often switch briskly, but there is a structure of simplistic costumes that keep it clear where we are. It is all rather brilliantly done.

There is a great strength in all the performances, De-Anna Matthews is highly effective at the broken Ruth, her child, then her job gone, and her attack upon Frank for this is a truly powerful moment, totally convincingly played. As Frank, Samuel Jordan is hugely effective, giving a depth to the confusion of the character broken by war, but perhaps more than a little guilt-ridden as well. Jordan though for me is even better as Alex, the quiet contemplative journalist, sharing some lovely scenes with Amy Catherine as Dr Mia. Her story is intriguing, and with news over the weekend, perhaps even more prophetic. It's tough, challenging, and sadly a very believable future. My only thought and possible criticism really is whether a small clinic could perhaps have such a global impact, she would I feel have to truly impossibly busy schedule. However, maybe the point here is more that she believes she has made the impact, but in actual fact, the more scary scenario is that this tale of global disaster could in fact just happen without a Doctor Mia instigator. 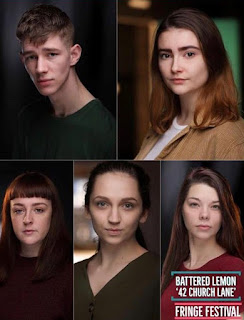 The final pairing of Erin Thorpe and Shannon Couchman, while involved strongly in the 1941 world, are so much more brilliant in our tale of Megan and Jamie. This love going wrong tale is stunning, and both tell it is with power, particularly from Couchman, who just possibly gives the best performance of the week as the manipulative, but then tragic Jamie. Couchman has a very visual face which shows tremendous emotion, and as we head to the brilliantly staged self-harm scene, you can't help but feel every cut. Superb work.

42 Church Lane also has a fabulous set, the central piece of sofa is ably supported by several other items which also work across the ages. A vast rug also is used to brilliant effect in a superb scene broken across the ages as words across the decades merge and a knock, knock, knocking at the door has repercussions for both.

42 Church Lane is superb, one of the best of the week without doubt, much because they have just simply created a clever story, a piece that is brilliantly written and constructed. This is very much how to make a Fringe show, it should live on beyond this festival.