Review of The Taming Of The Shrew at Waterside Campus (open air), Northampton 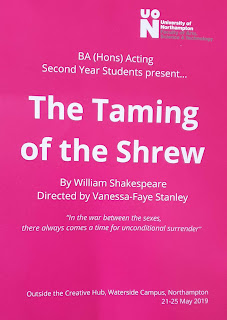 For modern audiences, The Taming of the Shrew has quite a sting in its tale that in this day and age is somewhat off-putting. However, the journey to that famous final speech is funny and never short of entertaining, so, allowing for the time the play was constructed, let's try to ignore how uncomfortable Katherine's final moment is and look elsewhere.

The Taming of the Shrew is one of the most famous plays within a play, and after Sly, later Petruchio is tricked into thinking he is a lord, the play within takes hold and becomes the bulk of what it is to become. A mixture of disguises and comic antics, take us slowly towards "a happy ending".

This production of The Taming of the Shrew was performed open space on the brand new Waterside Campus of the University of Northampton by the current Second Year BA Actors, and the space near the river and bridge offers a superb space with loads of opportunity for director Vanessa-Faye Stanley to use, and no question does she grasp the chance.

Members of the audience and general passers-by meet Petruchio (then Christopher Sly) long before the play begins, as cap wearing and "CITY!" football shirted he is about doing a little busking, so, with a little Green Day for one random passer-by the scene was set for the tinker, Sly to be foiled by the local lord.

The Taming of the Shrew has an exceptional cast, with no weak links, the whole group have exceptional comic timing, and it is a credit to the director that this, on its first performance, was as sharp as it was. Oliver Allen is excellent as Petrucio, from that highly adlibbed opening to the comic antics and through to the deconstruction of Katherine, it is a complete performance, never missing a beat character wise.

As Katherine, Louise Lord is equally as brilliant, capturing the intense out of control nature in exuberant form. She is simply stunning in the extremely physical work that she is challenged with, and those that are performed with Allen have more than a hint of danger with them, but no question, it is carefully and securely performed.

There is quite a sweet performance from Liv Gwaspari as Katherine's very different sister Bianca, and Megan Walker is huge fun as Tranio, while there is an extremely lively comic performance from Michaela Antoniou-Garcia as Grumio.

There is excellent quick changing comedy from James Bryan as Gremio/Vincentio, with this, staged brilliantly around the convenient tree in further great use of the space. Elsewhere Emily Copeland continues to act incessantly even beyond any possible need in a brilliant little eye-catching performance as Biondello.

Elsewhere there is enormous entertainment to be had from Raf Oriyomi's stick-wielding Baptista, utilising his physical skills to highly exciting effect. Finally, special mention must go to perhaps the best performance of the show from Will Story, making Hortensio into the most entertaining character of the play with his dodgy accents and silly disguises, and from a cast full of brilliant comic timing, he has best of it.

There is no denying that for a comedy, the context of The Taming of the Shrew is now a slightly indigestible one, however an incredibly spirited offering from the whole cast, and some excellent and innovative use of the space from director Stanley makes this version an excellent piece of theatre.

Performance reviewed: Tuesday 21st May 2019 (matinee) at Waterside Campus (open air/Creative Hub), University Of Northampton.
The Taming of the Shrew runs until Saturday 25th May 2019, tickets, free of charge, at https://www.eventbrite.co.uk/e/uon-second-year-acting-students-present-the-taming-of-the-shrew-by-william-shakespearre-tickets-61776573394Twitter feed for the University actors is @BA_Actors