Review of Rock Of Ages at Royal & Derngate (Derngate), Northampton 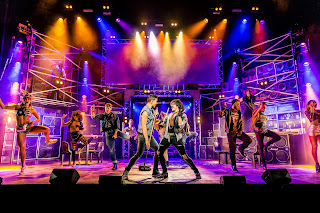 Musicals are becoming quite an interesting breed to review as they always end up via the audience, who are just out to enjoy themselves, a slightly difficult show to judge. How could you possibly criticise something that at least 90% of the audience are apparently enjoying and that at the end everyone is standing for, even yourself (so you can see the stage though for the dissenters)? Maybe you could look around and see how many people have left during the interval? Poor Audrey! More on Audrey later though. Maybe with Rock of Ages, you could simply just comment on how poor it truly is in places? That is tricky because the show actually knows that it is more than a little bit *bleeping* *bleep*. 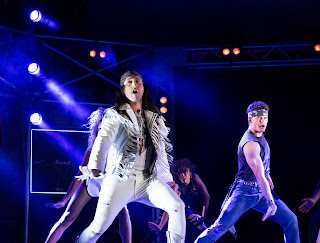 Rock of Ages follows Sherrie heading to Hollywood to make it big. After being robbed just after stepping off the bus, friendly Drew helps her and gets her a way into working the Bourbon Room. That is before a misunderstanding with Stacie Jaxx leaves her on the streets. Add some German property developers, a narrator and a still young at heart old guy, and you have a ramshackle story to wrap crude comedy and sexism around.

Let us be clear, I am fine with crude comedy, I am not some kind of dinosaur, honest, but Rock of Ages is crude, but regrettably unfunny with it most of the time. It doesn't help that the narrator Lonny is one of the most irritating characters you can imagine, poorly written, and just simply repetitive in his style. The written interplay with the audience at the opening is cringeworthy, and the focus of many jokes around one person on the front row, Audrey, feels awkward and prolonged. It is perhaps no surprise that she and her companion are gone after the interval, leaving initially some awkwardness to material in the second act, still relying on Audrey. It is a huge credit to the performance of Lucus Rush that Lonny is so much better in the second act, professional enough to judge the audience on the night and tone it down, and probably with his ad-libbing regarding Audrey, creating Lonny's best moment off script altogether. 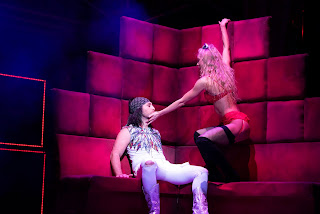 Elsewhere characters are painted with brushes the size of the stage, so, the actors have so much trouble making them have any depth at all. Jodie Steele as Sherrie and Luke Walsh as Drew are fine, but the former is more or less a sex object (like all the women in this musical), and the latter an extremely shallow character, purely painted as the male love interest, that no matter how hard the performer tries, stays shallow and boring.

Antony Costa fails to have the required stage presence to make Stacee Jaxx the megastar that he is billed to be, and struggles on a few of the big bold numbers at times as well. Kevin Kennedy, yes, Curly Watts, is though quite a revelation as Dennis. Nearly unrecognisable, and definitely not anything like you would expect. He gives the best performances of the main roles, and in I Can't Fight This Feeling with Rush, has the best scene with some neat stage work which is genuinely the laugh out loud moment of the night. 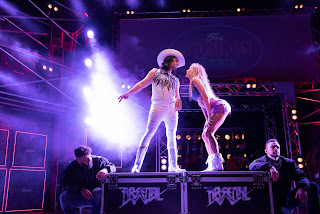 The best performances though are a little hidden, understudy Adam Strong is brilliant as Hertz, making what feels a very misjudged character work and his solo Keep On Lovin' You is an excellent moment of the show. Andrew Carthy equally survives the line of politically incorrect nightmare character with his brilliant performance as Franz. The best performance in the show though is without doubt from Rhiannon Chesterman as Regina, brilliant characterisation and a superb singing voice, the best of the show. It's a classy performance in a show that generally is devoid of any class.

There are other positives, musical director Liam Holmes and his band pump out some tremendous songs, in a soundtrack that is positively brimming with eighties classics, even if a few of them are butchered a little at times by the performers, or as is the tradition with Juke Box musicals, totally out of place. Dance routines are brilliantly created, and here superbly performed by a fabulous ensemble.

Chris D'Arienzo's book is at times pretty one-dimensional, crude, crude, crude, and it's added jibe at the 2012 film falls a little flat in the sour grapes way, updates are made to the script as well that do not quite work either, making it all a little rough around the edges. 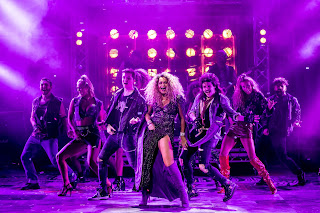 Rock of Ages is more failure than success, but you still leave entertained as the second act is much sharper and shorter than the first. The problem is that I have seen other shows recently that do this material much better, American Idiot does rock and sexual moves in its dance routines with more intelligence (so, yes, that is possible). Also, Lonny is Rocky Horror Show narrator lite and therefore fails more than succeeds. It is also clear that either by direction or choice, nearly all of the main songs are oversung, losing clarity and style, there are at times some beautiful moments though, High Enough being one of them.

Rock of Ages is noisy, broad, crude, knows exactly what it is about, and if that is your thing, you will love it. However, if you don't want tongue innuendo directed at you throughout the show, don't sit on the front row.

It is a little bit rubbish, but it knows it is, so, Rock of Ages is never without its merits.⭐⭐⭐Performance reviewed: Tuesday 7th May 2019 at the Royal & Derngate (Derngate), Northampton.

Rock of Ages runs at Royal & Derngate until Saturday 11th May 2019 before continuing its tour.