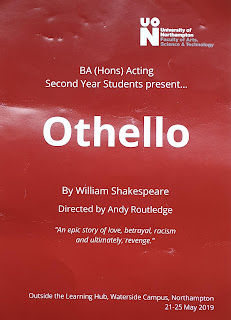 While one half of the University of Northampton Second Year BA Actors tackle the fun and mostly frivolous The Taming of the Shrew, the others dig deep into the unpleasant happenings of Othello, and curiously manage to plunder a little more comedy than you might expect from it.

Othello revolves around its two central characters: Othello, a Moorish general in the Venetian army, and Iago, ensign to the general, and ultimately tragically untrustworthy. It's an extremely dark play, that toys with themes of racism, love, jealousy, betrayal, revenge and repentance. It is weird it is as fun as this production manages to make it become.

Othello is played by Alena Crawford but played totally male, and as the brilliant Kate Jones did two years ago as Richard II, Crawford plays it totally convincingly, making the audience gender blind to the performer like many females actors are doing at this time. It's neat casting, and against Leonor Leite De Castro's totally tender portrayal of Desdemona, it works in a surprisingly brilliant way.

Ross Ward's Iago is a totally domineering and controlling figure, vicious in his intent, caring nowt about anyone in his plans, Ward is solid and channels a little in knowing looks that Tom Mothersdale is bringing to the current Richard III tour.

I really enjoyed Harry Sanders as Roderigo, the desperate and misguided rich man, pursuing Desdemona and used by Iago to devastating effect. Christian Zglavoci gives a crisp performance as Othello's lieutenant Michael Cassio, one of an endless number of people used and abused by Iago.

One of the worst victims of Iago's abusing is Emilia and this is given a delightful performance from Kelsey Bing, the poignant scene with Desdemona before bed is one of the highlights of the play, and Bing's portrayal of the breakdown of Emilia at the full revelation of what has happened is extremely powerful. I also enjoyed Sion Blake as all of his three characters, but most especially as the lively Montano, he has an excellent presence on stage as a performer.

Staging is much simpler than concurrently running The Taming of the Shrew, much because space is more orthodox as a theatre space. The performance I saw had an extremely good audience, and I suspect this, coupled with the second performance vibe did leave the issue that it was a little overperformed, the volume of delivery occasionally felt too high, but more especially the energy for over-enthusiasm maybe, left more lines fluffed than is perhaps normal from a University show.

However, otherwise, this was an excellent production, scenes like the safe return from battle and celebration of marriage have a brilliant modern vibe, the sort of thing that I simply relish from the University shows with the energy and dedication that the casts always have. Equally, there was some excellent use of music, the haunting background of Sweet Dreams a particularly inspired selection for the battle of Roderigo and Cassio.

I enjoyed Othello, once again, like Taming, it is packed with a great selection of performers, all, I think this time surprisingly for a Second Year selection, on an equal level. It all bodes well for the third year as the standard increases once again.