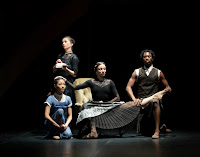 As a theatre reviewer, I sometimes attend styles of shows that I am a general layperson of, ballet is one. I have seen two before, and both while visually good to watch, I generally didn't know much about the detail they were going into, maybe it didn't matter? Also occasionally when I attend shows with unfamiliar history, I might seek an advisor as my plus one, and as it happened by luck rather than selection, my plus one on this evening was a former ballet dancer. I should plunder their wealth of knowledge perhaps? Actually, I choose not to, but more on this later.

Victoria is a new ballet from Cathy Marston, who over the years has illustrated through ballet a great many famous stories, from that of Jane Eyre, Elephant Man and Lady Chatterley's Lover. Here though, Marston brings her choreography to the life of Queen Victoria, taking her diaries as the very driving force of the production. It is, with a little help from the detailed programme story, a cleverly created ballet. 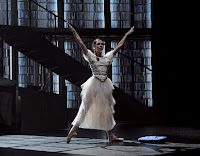 So, back to my companion expert. I thought about using her advice and listened greatly to all the descriptions being given, and then between us, we mostly decided to ignore them for the purposes of this review. The reason? If you are a ballet fan, you are more than likely to be seeing this brand new play from the highly regarded Northern Ballet already, and simply put from my companion, if you are not, you should do anyway.

My role here as that layperson I guess is to advice, my fellow layperson. Does Victoria have enough interest to hold the casual audience member who might have recently seen a traditional play or a crazy musical? The answer I think is yes.

Victoria is a visual feast of a show, presented by a huge and highly talented company, and Marston has worked extremely hard to clearly make this appeal to all, not just ballet aficionados.

The entire story is told through Victoria's daughter Beatrice played by premier (and soon to retire) dancer Pippa Moore, and it is a controlled and at times also fun performance. Her role, as a reader and indeed editor of the diaries, is a vital one, and as this piece flashes back and forth in time, her position cleverly switches between observer and instigator of the action. The latter in lovely but ultimately sad sequences with her love Liko. Moore is vital to the groundwork of the show, and it is a classy performance.

Abigail Prudames plays Victoria with an air of authority throughout, her command of the events, especially in the second half when it is Victoria's rather that Beatrice's telling, is brilliantly judged. Between Prudames and Moore, this partnership and skills of expression or deliberate lack of at times drive the entire show. 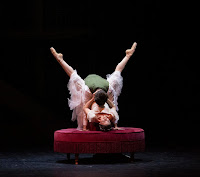 Elsewhere, there is enormous strength in the work of Mlindi Kulashe as Victoria's servant, and "companion" John Brown. There is also a particularly fine partnership between Miki Akuta as young Beatrice and her love Liko played by Sean Bates, their work together is some of the best of the show. However, this entire production has many fine performances, that it is mention all, except saying this is a very fine company of dances.

Marston's work manages to convey mostly successfully the detailed history, and to steal one item from my companion has some nods towards the work of Martha Graham, it will be very obvious to experts, and is also now to me, and Prudames is particularly superb when it comes to these moments.

Some of the staging and large performance numbers are superb and stunning to watch, so busy that your eye is drawn from performer to performer very easily. There are some glorious moments created with a particularly brilliant sequence involving the Queen's offspring and Albert's empire expansion, and a laugh out loud moment of shock from Beatrice to her mother's expressive coupling.

The set is extremely good, two great stairs that provide two levels for an observer to frequently watch, and the idea of the library itself is clever and well produced with a series of real and unreal bookcases, allowing dramatic usage of them. The only issue, and thankfully only in the first act, is a tremendously misjudged use of a giant curtain for set changes, often just a bust or a chair. On its first use, I thought it was a neat idea, however, on repeated use, it becomes a noisy distraction and should have been spotted as such in early preparation.

Philip Feeney's score is superb, bringing film style drama to the piece, but with some equally nuanced moments as well. It's vital to the success of the piece as well, and the highly talented orchestra is one of the best I have heard in presenting it, and the technical setup of this is top notch as well.

Victoria is brilliant as both a ballet and a carefully constructed story, it is clearly detailed, maybe occasionally too much so, so, a reading up beforehand is unquestionably recommended. However, ballet fan or not, you will almost certainly be delighted by this vivid production and should I suggest seeking it out.

A visually stunning piece of ballet, with detailed storytelling and performances.
⭐⭐⭐⭐