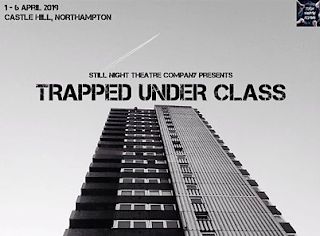 There is a piece of audio played during Still Night Theatre's Trapped Under Class that is of current Prime Minister Mrs May (as of 3rd April 2019), describing the controversial Universal Credit scheme, a slightly central theme to this play. It's interesting to an audience of this time perhaps to hear our Prime Minister actually talking about something other than a certain ongoing theme (as of 3rd April 2019, and indeterminant and possibly endless time into the future). The residents of a council block in this stark drama feel of a much different opinion I suspect though.

Following the death of their mother, siblings Sophie, Molly and Aiden, along with Aiden's girlfriend Charlotte and their friend Emma, find themselves dealing with low incomes, spiralling costs, and the stark reality of living hand to mouth under the constraints of this. 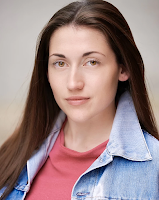 Running for a period of one year following the initial vodka shot celebrations of the new year being devastated by their mother's death, month by month we see their world break apart piece by piece.

As Sophie Cooper, Katie Glenn gives a stunning performance, the effective head of the family, dealing with the bulk of the challenges, of making things work. It's not a leap to fully understand the job that Paula down the pub is offering, but the sheer power of the final scene is still incredible, and Glenn handles both that and her entire character in a tremendously powerful way. 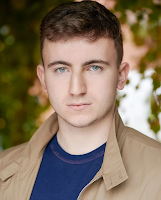 Harry Oliver's 17-year-old Aiden is the complete opposite, very much still a kid, slobbing it out with the need for comfort food and constantly bullying his sister Molly. Oliver makes however the character grow quickly as his responsibilities change. As his girlfriend Charlotte, Amber King gives a captivating performance, and one which has to convince both us, and these new people she finds herself moving in with during the course of the play. 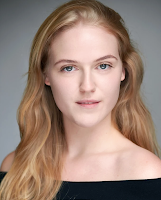 As the final sibling Molly, Fiona Moreland-Belle has perhaps the deepest character, the one who can't get a job, feels responsible for not being able to properly assist on costs, especially when her Universal Credit is sanctioned. She falls into what is effectively depression, curled up on the sofa broken, not washing, as her brother constantly makes clear in his not helping way. It's a brilliantly conceived character, a sad one of course, but very nicely played.

Finally, we have the strong concise character of Emma played by Abi Cameron, non-family, just a friend, effectively helping the whole setup try to work. Dealing with extra shifts, working out finances, the one with a total head on her shoulders, who finally, however, does break as she sees others in her eyes not taking things as serious. It completes a totally excellent collection of performances. 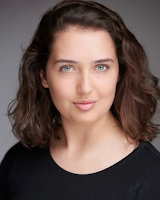 The play itself is well created, claustrophobic at times as events just take place around a sofa, in a room slowly becoming less constrained as finances take their toll on all things. Perhaps one of the best scenes though comes away from the home as a journey to the supermarket adds a nice expansion to three of the characters. Elsewhere there is a bold piece of theatre where we have a very long silence following the funeral. For me it's too long, just tightening it a little would have been great, also even, I would have liked it being broken by the sound of the kettle boiling maybe, a starker representation of mundane life going on after a loss. 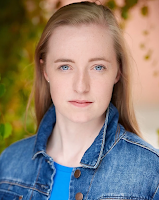 However, overall Trapped Under Class is a remarkable piece of theatre, giving a stark telling of what life can be like at present. It leaves the audience thinking far beyond the end of the play, and that is what great theatre can do. It also has one of the best-conceived end images I have seen, stunning!