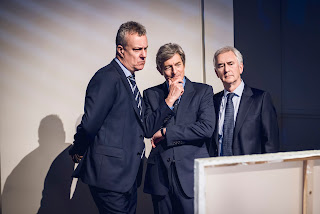 As the audience arrives for Art, they are presented high on the stage with the back of a painting. On closer inspection, it has none of the labels or stamps that art buffs like them to have, to form a quality provenance for the future. The back of this artwork is indeed a blank canvas (five feet by four). Turns out, when we finally see the front of it, it is also a blank canvas, but don't let Serge (Nigel Havers) hear you say that.

Yasmina Reza's script (translated from the original French by Christopher Hampton) is razor sharp, a joyous rollercoaster of pace, wit and verbal hostility, showing no signs of ageing after 20 years. This is a sparring match, where words are the punches, with just one moment of physical blows in the swift 80 minutes runtime. It's a tale about friendship, which uses a "white" painting as it's backdrop, and the way friendships can collapse over the most ridiculous reasons.

Not to say, someone spending £200,000 on a white painting isn't slightly ridiculous, and enough to fire up an argument, however, this is the touchpaper, nothing more to ignite things that have clearly been repressed for some time. How these three became friends is not clear, but we quickly see this friendship decline over Serge's painting purchase and then Yvan (Stephen Tompkinson) is turned on by both Serge and Marc (Denis Lawson) for his over-sharing of his personal problems. 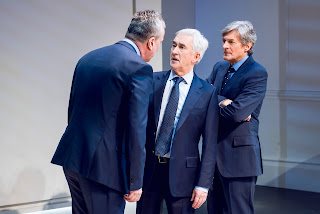 Art provides three brilliant characters for these actors to get their teeth into, and this touring show has three of the best around with decades of experience between them, and it shows. The youngster of the three, Stephen Tompkinson is a particular revelation here if you have only ever seen him in his assortment of television shows. As Yvan, the effectively common part of the trio, he elicits much of the audiences love. Whether he is receiving a very well deserved round of applause midshow following his expert delivery of a fast-paced four-minute monologue, or gaining the sympathy of the audience as he sits, head buried in a towel, he is the audiences champion without any doubt.

Denis Lawson's Marc gains slightly less sympathy, although perhaps many of us might be onboard with his opinion as we squint to see the colours hidden within the painting. I have always been an immense fan of Lawson on screen, and to finally get to see him live, is something very special, and as Marc, he is viciously wicked in his full-on opinions, and while we might squirm a little as he holds the felt pen late in the play, a lot of us may well have a little of "go on, my son" going on in our heads. 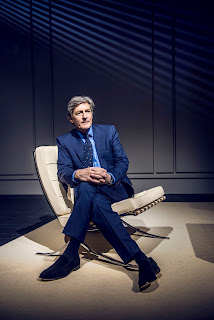 Nigel Haver's Serge is very much a Haver's creation, perfectly suited to the role, looking sharp and debonair, still very much the charmer. The script goes off a little from the Haver's we might remember though when it all gets surprisingly sweary later on. However, Haver's still manages to have a certain amount of grace even as he tussles physically, and descends into childish insults, undeserving of his sharp suit.

The set from Mark Thompson is simple, clean lines, but towering in presence, rising into the top reaches of the stage, it creates each of the three homes with the simple spin of one wall and a different painting. Three different chairs and a sturdy table, often acting as a perch for the characters, adorn the room. It is stark, clinical, and perfect for the show, and absolutely no place for Yvan's missing felt pen lid to hide.

There is some brilliant and perfect music from Gary Yeshon bridging the scenes, with sharp notes switching perfectly timed with Hugh Vanstone's quality lighting. Wafting into the building crisp sunbeams, very likely indeed to water down the prized painting.

Director Ellie Jones has kept everything simple, creating scenes like little works of art in themselves. As Yvan spills his personal problems, Serge and Marc become no distraction. Then later as they consume olives, it's all perfectly timed and placed. The three actors are at the top of their game here. The moments where they switch from ranting through the fourth wall and back into the conversation they just left are stunningly timed.

Art is funny, really funny in fact and while it is relatively short at 80 minutes, you don't feel shortchanged. An amazingly observant script, delivered with panache and brilliant pace by three superb actors. It's almost a privilege to witness it.