Review of A Swan In The Attic at the Playhouse Theatre, Northampton

March 28, 2016
Major spoilers are contained within this review.

Having fully adopted myself into the amateur theatre realm of shows in Northampton and now knowing a few of the people involved, it was perhaps inevitable at some point that I might have the awkwardness of writing a slightly poorer review where I knew people involved. However I have backed myself into this corner, so I shall have to bite the bullet and fight my way out.

A Swan in the Attic written and directed by Weekes Baptiste is sadly one of those slightly problematic plays, although not in this case with the performances. These I felt were in general nicely done from April Pardoe as lead Gloria through to the mad antics of Jake Abbott's Doll. April on stage for much of the show and with a significantly larger role than I have seen her perform before is confident throughout. However the play itself takes so many odd turns it often feels very difficult to follow their characters progression.

It truly is a difficult play to get a handle on as it moves between dramatically contrasting scenes from flashbacks and flash forwards many of which are only properly explained after reading the act descriptions in the programme (and even then, these are tremendously complicated). It is clearly an ambitious play but one which is too much so for its own good and fails frequently to be clear to the audience where we are residing in Gloria's timeline. It is clever that we have Gloria's imaginary friends, but this idea like many is underused and becomes a discarded idea until they return inexplicably in the final scene.

We also have the problem that the style of the scenes switch so often, with you never sure whether you should be laughing or sad at the characters expense. So both the fantasy elements are under explored and more importantly for me the dramatic ones. A throwaway idea comes from Gloria's niece Nina's (Joanna Leigh Hewitt) financial issues and the fact that she has "sold herself". This is referred to after this scene briefly in passing by Gloria and then nothing more of it. If you are going to even dare bring into a play something like this, it is really got to be explored in more than two brief lines otherwise you are in danger of losing any respect from the audience. This pretty much sums up the problem I have with Swan, throwing endless ideas at the stage in front of you and because of this failing to use many of them in any substantially insightful way.

There are also for me some strangely puzzling points in the plot. Not least that pearl earring scene at the end of the first act. From what we are able to understand quite clearly from how the scene is played is that this is discovered by Gloria as a clue to who has burgled her home. However then towards the end of the play we discover that she planted this earring to help her confront her family for their taking her for granted through life. Why would she need to plant the earring to do this? Why not just confront them without this weird pretence?

Then we have the character of Albert Tender (Robin Hillman), obviously intended to become Gloria's gent, but introduced in a strange way and then dragged rather bizarrely into the pearl earring situation to pointless effect. If Gloria had already met Albert before the burglary, I perhaps might have had a little more belief into why Gloria "found" the earring in the first place if she wanted to create a scene before her sister Charlotte (Petrina Oliver) and Nina. However this is not the case, so it just becomes really very odd.

This play also falls foul of one of my real bugbears in theatre, that of scene changes. While they are cleanly performed by the crew, they are ridiculously over complicated. The opening set of the attic is truly quite wonderful and detailed, but scene changes attempt to move us to new locations with far too much precision. The bench being brought on was great setting the scene of the park as were the excellent background projections, but why the pointless need to spin the armchair around? I am afraid that the audience needs to be treated with more respect on points like this. I did love how the crew came back and performed the burglary, this was a very neat touch. Unfortunately this then did kill the later scene suggesting that Nina had performed the burglary.

So pretty clear that I had an awful lot of problems with this play, but not really because of the performances from the actors. There are simply too many ideas within the play, leaving many very sadly underused, including really important subjects. I am truly sad that this didn't work for me as I greatly enjoyed Mr Baptiste's Lydia By Any Other Name last year, but Swan for me was almost the absolute opposite.

A Swan In The Attic was performed on Saturday 26th and Sunday 27th March, 2016 at the Playhouse Theatre, Northampton 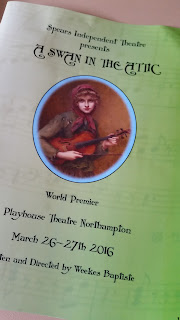