Review of UoN Fringe 2019: Unveiled by Myriad Theatre at The Platform Club, Northampton 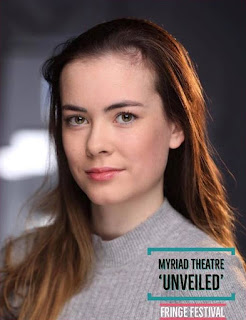 It is safe to say I think that reviewer and show maker alike never set out to deliberately write a bad review or create a bad show. There is simply no logic in it really for the latter, I mean why would you? However when the latter occurs and the former is there in the audience, things will end badly, and for me, it gives me no enjoyment.

For my penultimate show, Unveiled, at this year's University of Northampton Fringe Festival, Myriad Theatre performer Isabella Hunt explores what marriage means to her in what ends up being just 18 minutes of a show that sadly goes nowhere. Marriage to Hunt it seems involves intermittently putting on and taking off a succession of dresses, amongst a collection of anguished thoughts mostly that mainly involves an outrageously over repeated physical piece.

There is some very brief interaction with the audience among the lines of "how many of you are married?" and other light thoughts, where the answers are written onto a dress, the dress which Hunt is writing mostly distressed words upon during our entry to the theatre space before the show.

It is very light and non-existent, unfortunately, and for those paying £5.50 to watch the show, I imagine were even more disappointed as it reached, to the audience, an incredulously early and inconclusive finish, and they probably had words of their own to write upon that dress.

If as much care had gone into the actual show as the nicely prepared space, with place numbers etc on the chairs, this could have been as ever, an interesting show, especially as I don't recall seeing a University show specifically about marriage before. However, as it is, it is sadly the worst show I have seen over my six years following the BA Actors/Acting and Creative Practice groups, and that gives me no pleasure saying it.