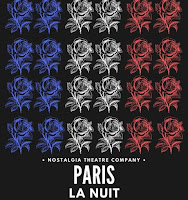 If victory and success at Fringe came from the atmosphere alone, Samuel Gellard and his show Paris La Nuit from his Nostalgia Theatre Company would have probably won the week before the show began. Deep in the cellars of Hazelrigg House, the very oozing essence of a wartime bar in Paris drips from the walls and festers around. We sit cabaret style, around tables strewn with traditional paraphernalia, photos, notes and coinage, and another sits at a stall propping up the bar, ready for an impromptu game of cards with our host. Never has that cellar been better dressed for a play before, and it might be cramped, and you might have hit your head getting down there, but boy was it worth it.

Jean Clement is our host, happy to entertain, get us inebriated and plays us cool jazz while he does so. It's a masterful performance from Gellard, just becoming the man, cooly leaning smoking his cigarette as we assemble in our chairs and never dropping the role from then on it.

Upon war breaking out, Clement signs up, and returning to his bar in 1945, a changed man, he finds a young boy, Mathieu, holed up and terrified in his bar. He can't throw him out, so, in return for his keep, he becomes the over-eager young waiter in his bar, busily flitting about filling our glasses, cleaning our tables. It is all rather sweet and lovely, and the unnamed chap playing Mathieu is an absolute delight, full of facial and bodily gestures and a future inductee to a course perhaps like this.

The story is told through recorded, English, dialogue, and live French, the latter of which, to a GCSE failed French pupil is lost on me. However, English is the bulk, and what happens in the French is lightweight enough and visually performed enough to not be a problem.

Having said that though, as the story progresses, it does become a little unclear regarding how the story is developing. It's as if the story is becoming as laid back as Clement is at times. Oddly enough this doesn't matter, it involves something about blackmail and Mathieu, and maybe that is all that matters in this case, as it's all done with a style that matters not. Well to me in any case.

Paris La Nuit is an event of theatre, there is a story, yes, but that is less important than how this piece evolves and the world it inhabits, which is fascinating on its own. Two fabulous performances and the very best of atmosphere makes this a lovely delight. Très bien, I think is the correct phrase?