Review of UoN Fringe 2019: Godspeed by Far From Home at The Platform Club, Northampton 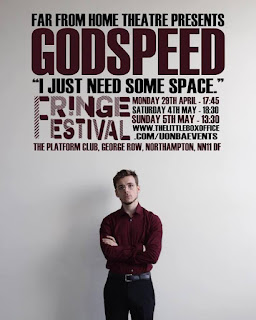 I have always been a fan of a little science fiction. Not those sprawling space operas, or complicated detailed tales though, that you feel the need for a science degree to battle through. I am more about a simple tale, well told, not packed with scientific lingo, just well told. With Godspeed from performer Fox Neal and his Far From Home company, he ticks all the boxes on the good tale, well told, checklist.

Ishmael Constant is humanity's last hope and following a comprehensive training, and having survived a troubling childhood, he is ready to embark on a twelve-year journey to a hole in spacetime to see if beyond it there is any hope for the people of Earth.

Godspeed is an extremely well-written tale, told through Ismael's initial agreement and through his journey and told in chapters, and most impressively interspersed with some brilliant flashbacks, indicated via the screen in brilliantly realised video flashing between Space/War/Home, it's an incredibly good idea and forms just one part of what is a technically brilliant beast. 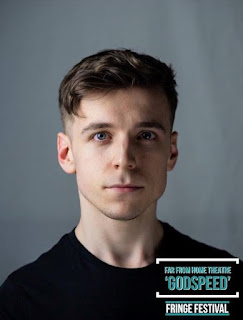 As well as this video, Neal performs expertly with rafts of pre-recorded audio sequences, perfectly timed, brilliantly edited, including muffled conversation and ill-fainted messages. It is a sublimely technically perfect piece and kudos to the tech team running the show as well, as timing and accuracy are key.

However, this is, of course, Neal's show, and as Ishmael he is superb, capturing the full life history of his creation, from an innocently confused youngster to one in love and then finally the journeyman of space, seeking humanities saviour, and perhaps more importantly for him, answers of his own. It's a brilliant performance, and his interaction with all the other invisible characters are immensely believable from Shay and to the HAL 2000 style ship computer "Virgil".

Godspeed is a classy show, clear, concise, effortlessly entertaining, and perhaps the very best show from this year's Fringe to take to the big proper Fringe up there in Scotland. Brilliantly written and perfectly performed.