Review of A Servant To Two Masters by University of Northampton BA Actors at Jacksons Lane Theatre, Highgate, London 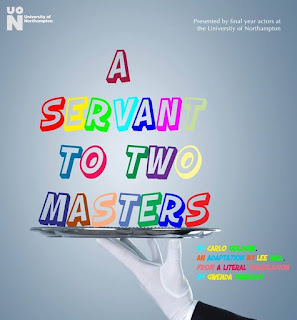 The third and final of the three plays presented by the third year University of Northampton BA Actors was wacky with a capital W interpretation of the already crazy Carlo Goldoni play A Servant to Two Masters. This play is very much more familiar to modern audiences in the guise of Richard Bean's extremely successful reworking One Man, Two Guvnors', but here Lee Hall's slightly more traditional set version is given a box of frogs working over by director Frank Wurzinger.

I have to be honest, this entire setup should have been so good, many of the cast had worked so well in other roles of similar style, outrageous comedy, playing to the audience, many were clearly so adept at this from their previous shows. So, why did A Servant To Masters fall down so badly?

I think, for me, one word sums it up, control. The craziness is not controlled, the cast appears to be often just having too much fun themselves, which doesn't translate the audience (well this one anyway). The control idea, as in the lack of it, also comes from the surprising sloppiness of some of the performances. Lines are missed, fluffed, a general lack of the style of performance seems to have been missed. It all makes it a mess of a play in general.

Not to say that all is bad, there are a few in this show that just get it, Emilia Owen as Clarice is at her very best in the course, finally given a good meaty role to perform, and her performance along with Terell Oswald as Pantoloon (a physically perfect and comic timed delivery), just make the show watchable. 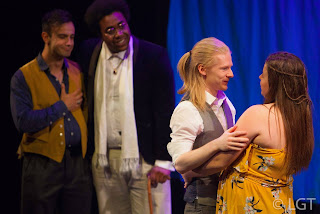 I feel the need, unfortunately, to blame the director for many of the problems, leaving the brilliant Bryony Ditchburn overegging the two apples and sock situation for the entire play was frankly ridiculous, a good initial joke ends up just being a tiresome situation. The idea of trampolines also either side for stage entry, potentially had some mileage for a few scenes, but with only very little chance of variety, this also became tiresome very quickly, and if they had vanished by the second half (after an incredibly long first half), I and I doubt many others would have been disappointed.

There were so many of the performers off the ball on this that it left an overwhelming sadness that this was the last memory I have of them on this course, as I know they are all so much better than this show let them be.

It didn't help the show that it had a slightly odd audience during the performance I saw, with a couple of rows of schoolkids who were clearly not adept at how to behave at the theatre (and likewise very disappointingly, under little control from their teachers).

They loved the show, many of the rest of the audience loved the show, I didn't gell with it from the outset and ended up resenting it the more as the laughs grew louder. I stand by the assertion that it was very disappointing, but many of the audience, and no doubt the performers will not agree on that one. Fortunately, I have had ample opportunity to have already told many of them how good they are already, as A Servant to Two Masters didn't let them show their finest work.

A Servant To Two Master was one of three shows performed at Jacksons Lane Theatre by the University Of Northampton BA (Hons) Actors from Thursday 7th to Saturday 9th June 2018.