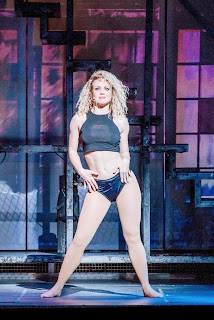 For the second week running, the Milton Keynes Theatre is overrun by a wave of eighties nostalgia as Selladoor's production of Flashdance The Musical follows hot on the heels of An Officer and a Gentlemen. However, is it nice to have more of that classic decade upon the stage? The answer mostly is yes, despite the fact that the story driving Flashdance is that light and flimsy at times, you just have to sit back and watch the dancing and the bright colours to get you through.

Welding genius, Alex Owens, has her sights set for a bigger thing beyond this tired and struggling factory in Pittsburgh.  Hoping to take her dancing beyond Harry's bar, she plans to make big, via Shipley Dance Academy.  Then, also drifting into her life comes Nick Hurley, who initially unknown to her, happens to be the factory bosses son, the scene is set for romance.

Flashdance has a generally excellent cast led with a tremendously good performance from Joanne Clifton as Alex Owens. Those familiar with her appearances on Strictly Come Dancing will doubtless know that she can do a dance or two. However, here she exhibits a talent for acting, and most especially a tremendously good singing voice. Carrying all the challenging numbers, while putting some exemptional effort into the dance routines. 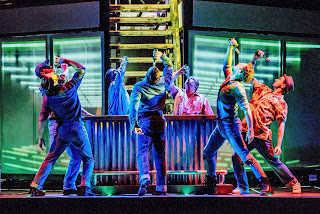 As her love interest, Ben Adams as Nick Hurley, creates a believable chemistry with Clifton, although his character is dressed often in an interesting style, and his singing while strong, often fall foul of drifting back to his boy band roots, as does his hairstyle, which exhibits more boy band than eighties characteristics, making you feel as if the show wanted to keep Adams more Adams than his character of Hurley, just to keep his inevitable fanbase happy.

There is a mixture of success in the other characters, some working, some not. The character of Gloria works mostly because of the exceptional singing skills of Hollie-Ann Lowe, for me the strongest singer in the company. However, others, like Jimmy (Colin Kiyani), while solidly created, just get expanded beyond the depth the character can allow, with the role becoming just tiresome in the end. 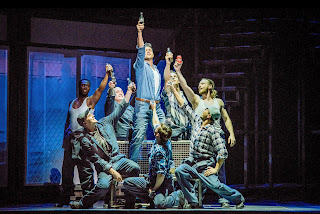 Finally, on the performance front, an announcement at the start of the evening revealed that there was an understudy performing, and oddly as a regular theatre-goer this actually always excites me, as I have yet to see a poor understudy performance (and I have seen a few). Here Garry Lee Netley steps into the role of Harry, the owner of, Harry's and he is immensely strong as the ridiculously larger than life character. Confident in all his scenes, and also dealing with someone's mic issue in a calm way as well. Once again the understudy gold moment strikes. Brilliant work! 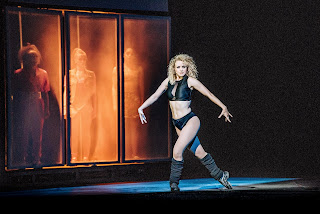 As expected there are some brilliant dance routines, although after a while a few of them tend to get a little similar due to the fixed style. Also once we reach that epic audition moment, everything seems perfect, and then inexplicably, rather than just allowing Clifton to recreate that scene solo, the rest of the company swoops in to make the scene bigger. It's a tremendous shame that they didn't feel able to leave this just as that solo moment.

The set, from Takis, looks the part but is ridiculously overused. Two great staircases exist seemingly just to be moved to a different location after every number, and often offering little variety still as a result. Stage work, in general, is a strange thing, with the director perhaps feeling the need to just do something at every opportunity, rather than keep it simple. The Maniac scene involves a starting point of a double bed which results in the need for it to be swept in from stage left to stage right, and barely two minutes with that part of the scene completed, swept back off again the same way. Other scenes end with the need for a stage item to have someone upon them as they are left, so add a gyrating woman to the pole dance podium to remove object for instance. The most curious moment ends with Hannah (Carol Ball), being embarrassingly removed backwards from the scene before it is taken over by Clifton and her younger gyrating mates. 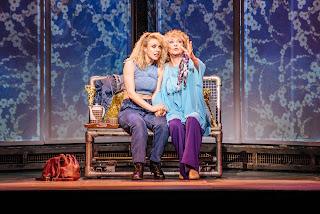 However, all the negatives aside, Flashdance has a warm feeling to it, and with an endless structure of scene after scene of music video like sequences, never loses either its energy or the enjoyment factor for the audience. The book by Tom Hedley and Robert Cary is fine enough, although the comedy moments often feel like they should get a groan rather than a laugh. However, the music by Robbie Roth, with his own and Cary's lyrics, add much beyond those original classics like What a Feeling, Maniac and I Love Rock and Roll.

It is very much popcorn theatre, offering minor theatrical thrills. There is much better theatre out there, but you can't help but leave the theatre with a smile upon your face, most especially after the energetic, and very long, curtain call, where everyone and I mean everyone, get their moment in the spotlight. 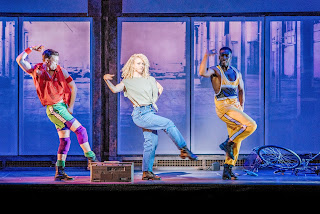