Review of The Crucible at Royal & Derngate (Underground), Northampton 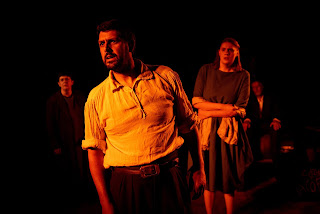 A few weeks ago I headed down to London to see this years graduating University of Northampton BA Actors perform Arthur Miller's classic The Crucible, and while it was generally spotlessly performed, as expected, the staging of it was tremendously dull, offering little stimulation beyond just the words being said. It made a classic, quite dull as a result. There was no such issue with The Actors Company production, staged in the atmospheric Underground space, and directed with such style and flair by Fay Lomas, to make Miller's play unrecognisable from that London version.

Based around the Salem Witch Trials in Massachusetts, Reverend Parris (a tough uncompromising performance from Steve While) comes across a group of girls dancing in the forest. When one of the girls, Betty (Laura Green), falls into a coma, events spiral out of control for many of the residents of the town, as accusations fly. Soon, Judge Danforth (Sue Whyte) is on the scene, and the lives of the residents are destined to change forever.

While Miller's play is without question superbly written, it's long and extremely wordy, and for modern audiences a potentially tough watch. Here though in the dank Underground, the environment is right, the performances gell, to frankly make The Crucible really rather entertaining, and that was a phrase I never felt I would ever write. 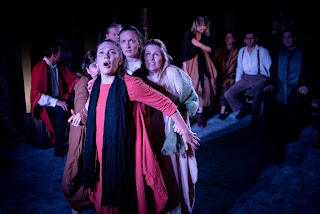 It helps that there are some simply incredible performances from this quality amateur group. Leading the way, not for the first time, is an amazing one from Davin Eadie, up there easily with a professional performance, he inhabits the iconic and soon to be broken character of John Proctor in an amazing way. Never switched off in his performance, I loved the non-verbal glances and exchanges going on during the courtroom scenes, for instance, it's a performance to savour.

Elsewhere, Sue Whyte as the gender-switched character of Judge Danforth brings a stunningly clear and calculated performance to the role. There is no swaying this Judge, this is the court, her court, against all against it Salem, a stunning performance. Corina Mann brings the leader of the "witches", Abigail Williams, to life brilliantly, her power over her "coven" in the court scenes is amazing, and so brilliantly staged, with some stunning movement work created by Natasha Harrison. 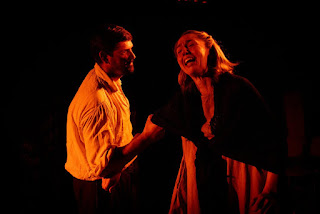 There is an unremitting amount of emotion absorbed into Jo Watts portrayal of Mary Warren, creating a quietly powerful execution of the character very much stuck between a rock and a hard place and driven beyond anything anyone could take. In a perfect balance, Helen Gibb brings a calmer approach to Elizabeth Proctor, wronged, but strong enough to somehow be dealing with the situation. Both are brilliant in their own way.

The quality performances go right through the cast, Mark Farey makes much of the relatively standard character of court official Cheever, while Erica Mynard as Ann Putnam puts in the best performance I have seen from her. Indeed, it works so well, that you feel at ease with all of the scenes, despite the obvious differences in acting a group like this always has, as a team it works at all times. 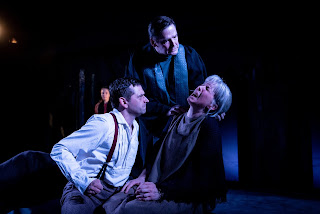 The set design from Anna Kezia Williams, while simple in theory, absorbs us into the whole piece, striking wooden posts, and later the simple use of benches brings us the audience into the courtroom. There is also tremendous us of lighting from Jonathan Blunsdon, working so well in the cramped space. Blackout, dull colours, and gradual transitions, it is a thing of beauty in itself.

This wasn't the best I have ever seen from The Actors Company, I doubt Market Boy will ever be matched, but it was so close. Stirring, dynamic, the most perfect environment. It's a bold statement, but this is the best that I have ever seen of an Arthur Miller play live, not perhaps because of performances, but because of commitment of the cast, and such stunning direction from Fay Lomas. Making something now so traditional like The Crucible into a piece so captivating for the modern audience. It had a large school group enthralled, and silent at the performance I saw, and I am frankly not surprised. If you missed it, you missed an incredible treat.