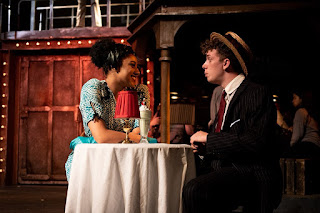 Last night I was back at Royal & Derngate to see the Youth Theatre/Young Company production of Bugsy Malone, this time seeing the almost completely different cast of Clyde Company. This second evening of the show had the fortune of running much smoother, with less of the technical issues that had beset the previous evening and restricted the success of some of the scenes. 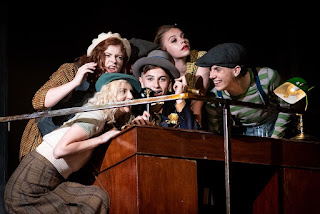 It was most apparent in the Fat Sam's Grand Slam scene, which became a greater hive of activity, with a full dance routine taking place, which unfortunately hadn't happened the previous night. Leading this scene was a full-on performance from Morgan Charles as Tullulah, exhibiting the vocal talent, and most especially the dance skills she had shown in last years Fame.

In the lead for this second company, and taking a much different approach to the role, was Nathan Stroud. Here we had a more mature Bugsy, not just in age, but in personality. The slightly more serious style worked excellently alongside a sterner and sombre portrayal (at first) of Blousey from Mia Rista. She allowed the character to evolve gradually, and by the time we were at the lovely swing scene (nicely created from the flights), Blousey was a much different character, and playing off the more clowning now, hot dog eating Bugsy very nicely, this relationship was completed at this point in a very believable way. 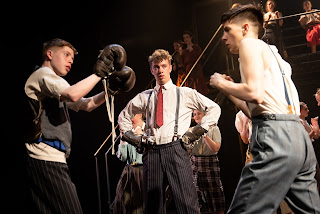 Oscar White's Fat Sam lurched from almost straight acting to crazy moments. His "Tallulah" moment during the "go fix your face" scene was an inspired moment, which had the audience rightfully in hysterics. Personally, I did feel the audience interaction scene was played at too fast a pace, and much of the humour opportunity on this one occasion was lost. It's a nice fun scene, so doesn't want to be hurried.

There were talented little performances from two young ladies as Livvy Finney as Fizzy gave a sweet, gorgeous little show of Tonight, and then later a much more boisterous and showy turn from Roxy Raggio as Lena, in her front of curtain song, Show Business. Both showing an immense amount of confidence. Elsewhere hiding in the ensemble, Alfie Sanders was a highlight, oozing
confidence on stage once again and making very much the best of his opportunities. 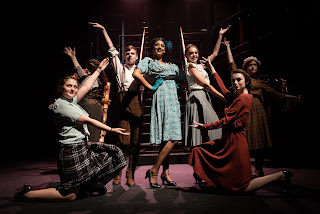 James Clements and his nine-piece band during both company performances filled the theatre with some glorious period music, while the set from Sarah June Mills provided a solid and professional aspect to the show. Lighting, from Charlotte Burton, was also a fascinating piece of work, deliberately underlit to depict the dingy environments it worked extremely well to create the depression era and then switching to the bright lights of Fat Sam's club. I felt that there were some sound issues once again, with levels of the performers feeling wrong, however, mostly lines were generally audible. 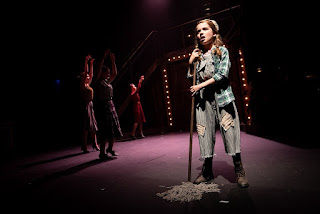 Once again this company provided great entertainment via this favourite show with youth groups, and devoid of the few unfortunate incidents that bogged down the previous evening, made you appreciate the show a great deal more. Well worth catching either company if you are able to make it before it closes on Sunday. 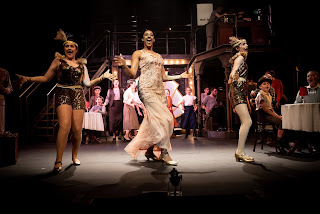