Review of The Importance Of Being Earnest at Royal & Derngate (Royal), Northampton 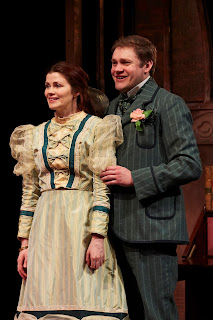 There is no stopping the sharpness of Oscar Wilde's wit, and The Importance of Being Earnest is probably his best-known play, and while Original Theatre Company's touring version doesn't present it at its best, it is still an entertaining evening at the theatre.

Jack loves Gwendolen, Algernon decides he loves Cecily, Lady Bracknell disapproves, and both Gwendolen and Cecily can only love Earnest, oh and it also includes a handbag. Major confusion and comic situations ensue.

The Importance of Being Earnest in this form is curious, for the most part, it has solid and reliable performances from its cast. Peter Sandys-Clarke cuts a fine figure as Jack Worthing and captures his willing attempt at maintaining dignity impressively as the ridiculous events envelop him. Likewise, Thomas Howes suits the buffoonery of Algernon Moncrieff very well, deftly, and often, casting himself across various pieces of furniture. However, despite this, there remains a lack of that special thing between them, a verve and energy to the performance. They may do the physical stuff well, including a literal pudding fight, but something in their characters, difficult to pinpoint, just isn't there.

What is there though is a brilliantly delivered performance from Louise Coulthard as Cecily Cardew, all precocious and neat and organised. Her scene with Gwendolen Fairfax (Hannah Louise Howell) when they refer to each other's diaries for the official claim of Earnest, you could easily imagine happening in the modern world as they protest over the time of each other's Facebook status updates. 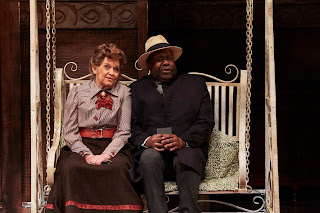 I really enjoyed also Susan Penhaligon's Miss Prism, as much an act of facial expression as dialogue one. She had some great little scenes with Geoff Aymer's Rev. Canon Chasuble, who himself delivered some impressive despairing looks to the audience.

Then there is the monster that is Lady Bracknell, played in this production by Gwen Taylor. This should be so right, but sadly it ends up being a major disappointment of the production. Scaled back on the ghastly scale in the extreme, the life of the character has been removed, despite the biting lines of Wilde still being there. It is a tremendously curious idea to spectacularly play down the handbag scene as well. Taylor delivers it in a whimper rather than booming style, as expected, and the whole scene builds to this point poorly, due to the decision of having her fiddling about with her purse awkwardly in the buildup. If we were to excuse this reinterpretation of that single moment as a bold idea, it's difficult to explain away how Lady Bracknell says Wilde's cutting lines, yet delivers them like a kindly auntie most of the time. It's like making James Bond ugly and him being scared of climbing ladders. Although much of this down-playing is probably at the hands of the director rather than Taylor's performance, it still creates an immense disappointment.

Elsewhere, I did enjoy the idea of having the same performer, Simon Shackleton performs Lane and Merriman, it's not a big role, but he was rather splendid in it. However, as for adding the character of Moulton to proceedings, she had a childish and pointless impact into the first act and provided little of consequence in the second. More annoying than adding anything for me. 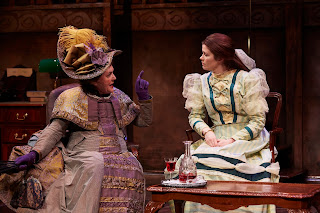 There there is the decision to incorporate the two intervals into the evening. It slows the pace of the evening quite dramatically, and after the slightly lacking in pace first act, it takes some significant time to recover. This wouldn't be so bad if we were treated to an enormous set change, but although Gabriella Slade's design looks ornate, and actually quite gorgeous, the main body doesn't change and all we have is some altered furniture, added hanging baskets and some bookcases for the acts. Nothing worthy of a 15-minute break.

For me The Importance Of Being Earnest is very similar to the touring version of Of Mice And Men I saw earlier this year, a perfect opportunity to see a classic on the stage, if you never have before, but if you have seen the show before, chances are you may well have either seen it better than it is here, or not see enough innovation to make this worthwhile.


Solid, but ultimately disappointing new production of a classic play.
⭐⭐⭐

The Importance Of Being Earnest runs at the Royal & Derngate until Saturday 12th May 2018. Details of Original Theatre Company at originaltheatre.com


Photos: The Other Richard 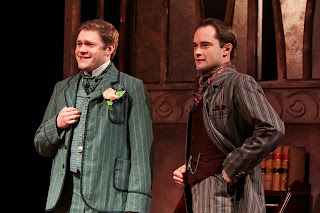