Review of Crimes Under The Sun at The Core, Corby 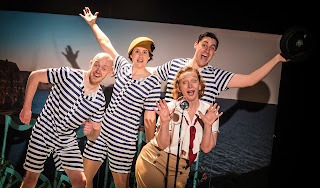 It is safe to say that there have been a lot of Agatha Christie spoofs kicking around over the years, they are ripe material to plunder, and often feeling as if the original author was even sending them up at times as well. So, to discover another one on stage at The Core Theatre in Corby is no surprise.

New Old Fiends' Crimes Under the Sun is a patch above many of them, a speedy, witty and genuinely ingenious take on a Poirot influenced case (no prizes for guessing Evil Under the Sun). As our lead, we have a curiously Belgian detective Artemis Arinae, Poirot in all but name, and more specifically gender (it's the first thing I noticed about her, to steal a joke). The show opens relatively badly, with a rather long introduction from our detective played by Jill Myers. It is the only downside of the evening, as once the stage is full of the quite brilliant collection of characters, this show whips along with an amazing intensity.

The characters created in Crimes Under the Sun all feel very like Christie like, just a little heightened. Myers Arinae is a smart clever female conception of Poirot, happy to peddle the line "little grey cells" out at many an opportunity. There is some nice play of creating a female detective here as well, especially with a nice pay gap conversation between her and Inspector Aquafresh which got the audience rippling.

Packed full of amazing over-the-top characters, Crimes Under the Sun truly is entertaining. It's is true though that Jonny McClean manages to steal every scene he appears in. He is superb as the physically adept Alcazar, creating some disturbing postures to make you squirm. Perhaps his biggest impact though comes from his first appearance as Lucian, a masterstroke of comic genius. A star turn.

Feargus Woods Dunlop has great fun with his trio of characters, perhaps the best of which is the sex-obsessed Father Ginnell. His exchange though in the character of Nelson Cholmondeley with Alcazar is a fabulous though, and I did delight in the idea of Arinae typing the name away as it was spelt, a neat touch. 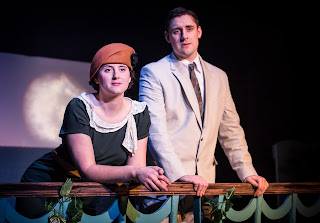 Completing the quartet of cast members, who bring the 14 characters to the stage is Heather Westwell. She is a delight as Rose Wentworth, creating the perfect English rose, with a wonderful slightly looking to the sky posture, simply divine. At odds with this is her moment of intense slapstick as three PC's, brilliantly performed and just simply hilarious.

There is one curious break from standard proceedings when all of a sudden the cast burst into song. It works, just, simply because of the skill of the cast to recreate each of their individual characters so well. It ends up being a nice diversion, once you have got over the initially confused moment.

The intensity of the performance never diminishes and heads for a crazy paced and amazing denouement as the three actors have to bring to life every character on the stage at the same time. The inventiveness of this is a delight to see, and it also highlights once the brilliant set from Carl Davies. Incredibly simple to look at, but it adapts so well into the several locations needed, and I really loved Westwell's set changing cleaner, complete with a fag in mouth. 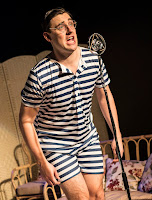 James Farrell directs with a nervy edge which keeps everything flying and his skilful cast is able to keep up with the antics. I did feel that there were a couple of long moments where there was a restricted view for those left of the theatre, with the policeman scene clearly blocked for some by the inspector and a coat stand blocking Westwell in the denouement scene, but these were minor quibbles on a generally excellently created pierce.

Crimes Under the Sun is very well written (by Dunlop), there are some brilliant jokes (the silver salver and a certain flag spring readily to mind) and word interplay, and even in its madcap moments, you have to appreciate that it's actually very cleverly constructed as well. A genuinely fun piece of theatre, which is worth catching if it's heading near you in the final few nights of its tour.

Performance reviewed: Thursday 18th May 2018 at The Core, Corby.
Crimes Under The Sun is currently touring, with details at http://www.newoldfriends.co.uk/
For further details about The Core see their website at https://www.thecorecorby.com/ 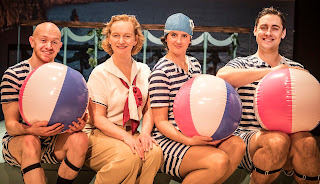