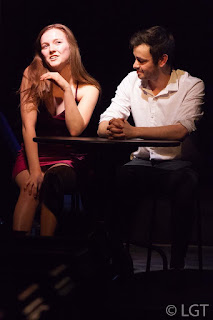 While Something Human from Incubus Theatre wasn't the best of the shows during the Flash Festival 2018 (but it wasn't anywhere near the worst), it had perhaps the award of the most discussion between myself and companion of the week, fellow blogger The Real Chrisparkle.

Something Human weaves a confusing web of a story, that often offers questions in the head rather than answers. Centred around a mundane office, a cleaner (Lori Heather) cleans, a manager (Jason Pile) manages, and a newly appointed PA (Anya Gallagher) PA's. Wandering into the mix is a mother (Emilia Owen), not mothering at present, as she is seeking her lost daughter.

What slowly then becomes exposed is the possibility that all of these people are criminals, the cleaner cleans up bodies of those she has slaughtered, the manager has interesting bedroom activities, the PA we discover is a paedophile, and could that mother have truly killed her daughter? 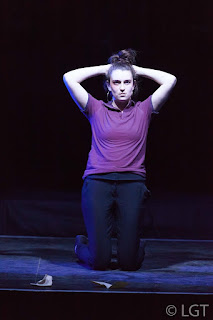 I won't pretend that I fully understood the story Something Human was trying to tell us, hence the post-show discussion. What we are "told" though, is that the cleaner, who spends much of her time when not cleaning, on the phone to men and threatening them, has killed three of these men, and at capture, tried to off two more. We also learn that she has Munchausen Syndrome (definition: a factitious disorder, a mental disorder in which a person repeatedly and deliberately acts as if he or she has a physical or mental illness when he or she is not really sick). Now could this explain away that the other crimes of the characters are within her mind, or does this office have a surprisingly high level of criminals?

It perhaps doesn't matter fully that Something Human has threads that might not be connectable in the head, as it entertains, and stimulates conversation. If you didn't fully understand it, it doesn't matter, as you will have mostly enjoyed the ride. 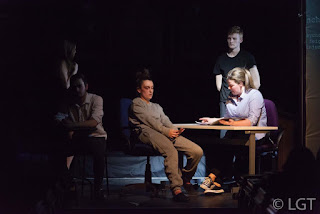 The performances especially are excellent, Heather offers an often scarily believable lunatic, full on in many scenes and a nice style of talking down to people. She makes the character very much inhuman, and extremely believable in what we are told she has done. Emilia Owen presents the opposite, a very human character, desperate to find her child, exhibiting the emotion you could truly imagine someone in that terrible position would. She couldn't possibly have killed her daughter, could she?

Perhaps the best performances though come from Pile and Gallagher, and also at their very best working together. Pile is slimy as the manager, but you can't help but like him, he has that thing that oddballs in movies have, he is personable. He is clearly a serious creep, and we know absolutely why he wants to keep his newly found, young and attractive PA close to him when transfers are hinted. 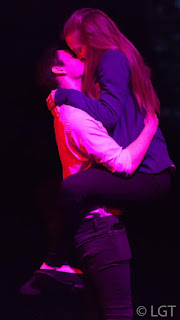 As the PA, Gallagher is once again superb, a reliable presence throughout the BA Actors shows, here she is a lovely, and sweet presence, and again there is no way she could be a criminal of any kind, is there? Her flat scene with Pile is expertly played, moving through the emotion, building to the genuinely scary and dramatic and bloody culmination.

I don't pretend to fully understand everything that Something Human represents, and perhaps there are more questions left at the end, than answers. However, I didn't feel shortchanged because of this, like I have with some other shows. It suits the play that it ends itself on a bit of a potential mystery, and for that reason, Something Human remained an extremely entertaining hour of theatre. 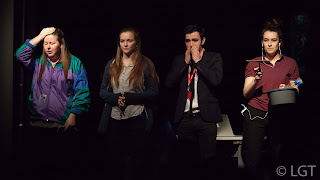