June 07, 2017
Despite being a long term blogger, the alternative vlogging has mostly passed me by and I have rarely sat and watched many and certainly am not an avid subscriber of one, however the social revolution of them has not passed me by as I am very aware that many people make an awful lot of money nowadays as vlogging stars. In this Flash show Olly Manning plays one such vlogger and in Push & Shove, he has something very special for his subscribers.

To be perfectly frank, that something special is really quite simple to guess. I realised very early the contents of the ominous box that Olly's character Jared Howell presents to his audience at the start of the vlog, and it is clear very early on who is going to be on the end of the said contents as Jared goes through his pretty bleak piece to camera. However guessing does not change the impact of this cleverly put together play. 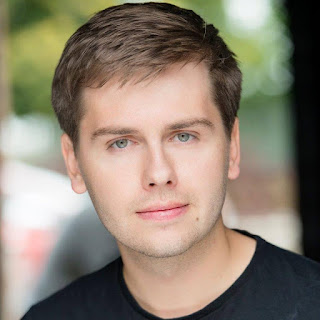 At the basis of this Flash is another issue play, this time mental illness, one which thankfully is gaining more and more recognition after having spent too long being ignored, most especially in the male gender. Push & Shove handles it with a nice touch, allowing the story to unfold in a believable way, Olly chipping away for the audience the emotions of Jared beneath.

There is a delightfully well-sung song during proceedings to music nicely played on guitar by Luke Mortimore, although this did get me wondering how we were meant to interpret his appearance as everything was supposedly done live. Was this chap sitting in the corner of the room observing Jared as he made his final vlog? It just felt strange as everything else was intuitive and being created very naturalistically by one person for his audience. Not a problem, just a little something I was unsure of.

There is also an issue of performing to a camera for a vlog for the audience within the room and this was slightly made more problematic by the configuration if the seating with audiences on two sides rather than the usual format, which could have meant it was presented front on, instead of often to one side.

However this was a powerful piece of theatre well performed by Olly, which while didn't hold much surprise (except for one member of the audience), was very well constructed and believable in its telling of a very real issue that the world needs to deal with.