Flash Festival 2017: Broken by Out Of Mind Theatre Company at the Salvation Army Hall, Northampton

June 13, 2017
Even with a few shows to go in the Flash week this year, I felt that with Broken, I had seen the best that the festival was going to offer. Looking back now, it was and perhaps it is, combined together with performance, visual style, tech, and intriguing storytelling, one of the very best Flash shows I have seen.
I have seen the split personality line before at Flash, however not quite like this case, multiple ones and so many different layers to the same person. Our character is Billy Milligan, accused of crimes that he has no knowledge of. As we follow the play we learn that he is suffering from this mental illness of 24 different personalities, one of which is the perpetrator of the crimes. We are introduced to just a few of these in this performance, we have the six-year-old child (Victoria Rowlands), a constantly dour sulking woman (Rachel Brown), an American (Liam Faik) and an aggressive confident young lady (Becky Fowler). Then there is Ben Hampton who is cleverly both the culprit and the detective.

If all this sounds rather confusing, it probably does written like that, however, Broken itself never is. It creates through ingenious and clear storytelling that premise above into a coherent and eminently followable tale. Each of the characters is so distinctive that you always know where you are and can follow the path of the tale.

Broken contains so much brilliance that I must surely miss some of it out. There is the most glorious opening scene first of all where the actors are stalking in the darkness throughout the gathering of the audience, silhouettes to the backdrop of the brilliant space that is the Salvation Hall venue. We have some physical theatre of the very best from the opening piece featuring all the ladies depicting the effect of the assault and onto one of the most incredible scenes of Flash ever and the silent Ben Hampton performing to the words and movement of the other Billies behind him. Perfectly timed and clearly rehearsed to an incredible degree.

Tech and lighting in this production are also of an incredible standard, creating brooding and dazzling environments depending on the setting. I also have no doubt in saying that the pre-recorded video footage was the best that I have ever seen in a Flash. Expertly created, supremely edited and showing an immense polish throughout. There is some excellent use of music at times with building atmosphere. However, this also provides one negative in the scenes within Billie's mind, the music selected was perhaps a little too intrusive and repetitive and because the performance is upstage during these scenes, it did occasionally overpower the speech.

Performances are excellent throughout the play and while it is unkind to single out individuals, a couple I must. Victoria creates a quite brilliant six-year-old, wide-eyed innocence and offended sublimely by rude things, she is a delight in the role but importantly without ever making it silly. Elsewhere Ben Hampton brings in an exceptional performance, stirring a great deal of emotion from the audience with his closing scenes. I do not mind admitting that the sequence where one by one the Billies depart created a larger and larger lump in the throat as we saw each one move on.

If my memory serves me correctly, Broken is up there in the top five shows that I have seen during my four years at Flash. One of the longest I have seen here, but never outstaying its welcome as you delight in every minute of it. It was the one that if I had been able to, I would have watched a second time. Really quite brilliant and I hope that this (and perhaps an extended full play) survives beyond Flash as more people need to see it. 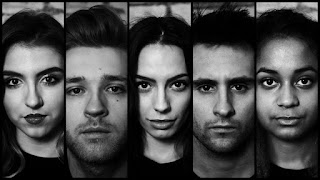