March 21, 2016
Following the rather poor play in the form of Days Of Significance (and a little bit of minor social media storm), I am happy to say that the third and final outing from this years third year uni shows was a much greater success. This despite the fact that Greek themed plays are well down in my own personal favourites.

Written by Moira Buffini, Welcome To Thebes is an exploration of an encounter between the wealthy state of Athens under leadership of Theseus (Vandreas Marc) and the substantially poorer Thebes of the title under command of Eurydice (Sharni Tapako-Brown). Lurking in the background are Prince Tydeus (Charlie Clee) and lover Pargeia (Kathryn McKerrow) seeking to snatch power through their own stirred up anarchy.

The direction from Eva Sampson is for me the best of the three plays, superbly whipping the audience into the world of Thebes with opening tension in the stalls of the Royal. Three soldiers; Megaera (Madeleine Hagerty), Scud (Daniel Gray) and Sergeant Miletus (Patrick Morgan) sweep into the Royal threatening the audience and wielding guns. It is a tremendous scene of impact and well performed by the three performers, including Daniel Gray eye starring and threatening me with shampoo I believe, or I may have been mistaken.

Right at the start of the play the all seeing blind beggar Tiresias (Megan Burda) takes her place at the front of the stage and then virtually never leaves. A magically writhing performance of great physicality is superbly done. Her lines when they occasionally occurred, were invariably vital and delivered quite perfectly. There is no doubt that this must have been a tremendously challenging role, however Megan dealt with it with style.

Vandreas Marc as Theseus is quite perfectly cast, looking every inch the leader of men coupled with the most perfect voice for the part. It was also wonderful to hear Amber Mae a little more after being rather quiet in recent Uni shows. Certainly the gentlest performance of the play as Ismene and tremendous in the scene when the moment comes that she has lost her love. Suzannah Cassels brings in another tremendously strong but unshowy performance as Antigone.

Kathryn McKerrow (Pargeia) and Charlie Cree (Prince Tydeus) work stunningly well together. Kathryn is really quite scary as the domineering character that even in the fifth row, I was quite frightened of being so near to. Charlie, I have no shame in admitting is one of my favourites and is the one of the group I have seen perform the most via a couple of Masque plays. He is just a tremendously watchable performer, full of that physical impact performance especially. As Tydeus he is as powerful as ever and really a horrifying character. The scene with Ismene in particular is a truly unpleasant, but brilliant one.

The final individual mention has to go to Sharni Tapako-Brown in the most breakthrough performance of the three shows. Yes, while brilliant in previous performances, here as Eurydice, this was something else. Poised perfect and strong in every sense, this was quite simply one of the best performances I have yet seen from the University shows. I don't think I have seen a female Uni actor command the stage in quite this way before. Magnificent!

Away from the actors another fine addition to this play which was generally absent in the other two was a couple of scenes of choreographed movement to music. I can be won over quite easily by quality ones of these, and the two in this play were excellently done and as the best do for me, raised the hairs on my arms. I really do love them!

The play itself can at times feel somewhat chewy and lulls develop at times, especially through some of the very long first half. It is a somewhat unbalanced play time wise with the second half barely a third of the first. However through the effort of the skilled performers and the director, enough momentum keeps the play on the move.

Despite my Greek reservations, Welcome To Thebes for me was an excellent production with some really clever directorial decisions and a great deal of excellent acting.

With the three plays now done, I am truly ready for Flash. Roll on May! 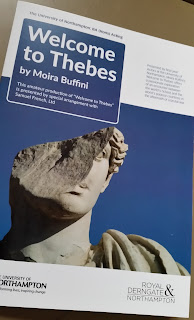