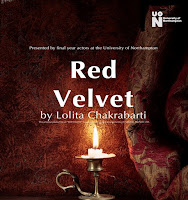 Sometimes in theatre, whether you are in a big London venue, watching a big name star, or just watching a group of perfectly cast individuals, everything just feels right. Magic is happening. Without shooting the bolt of this review in the first paragraph, Red Velvet is that. Maybe the greatest moment of University of Northampton BA Acting history to date (that I have seen, and it's been quite a lot now). It all feels just right.

First and foremost, Lolita Chakrabarti's play is a classy piece of theatre, starting out with more than a hint of Ronald Harwood's The Dresser, before spiralling out into a period piece of racism and acceptance. It is just simply brilliant. At virtually two hours without an interval, it also never drags at any point. I said after that I had seen hour parts that had felt much longer, and it's true. When the lights fade at the end of the play, you don't feel you have been seated for that length of time. 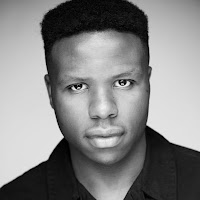 So, much enthusing about the play itself then leads onto doing the same about the performances. All, even if not mentioned here, are brilliant. At the helm is the incredible Michael Gukas as Ira Aldridge, a black actor of the stage long, long before any acceptance of such a thing likely. There is no coincidence I think in the casting because I'll eat my hat if Mr Gukas doesn't also have stardom awaiting. Ira's arrival into a company of actors (mostly not accepting of) to take over from the ill Edmund Kean is received in a mixture of ways, and that is what drives the piece onwards from this point. 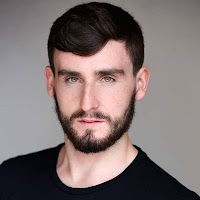 Elsewhere, Gukas is surrounded by superb performances, Ryan Greendale deals with the worst of the characters, Charles, he is the most repulsive of racist people and challenged also to deal with this person replacing his ill father as well. It's a tremendous performance from Greendale, that elicits no sympathy, but also somehow still seems to be not dislikable, simply because we as an audience try as we might to understand what is ingrained into his head. The time is the time, it cannot be changed, as to his character Charles, the black person must serve, like the quiet and obedient Connie does (an excellent calm performance by Shemelia Lewis).

Joseph Mattingley is at times equally repulsed by Ira's appearance as his character Bernard, but it is softer, nicely played, as a perfect bridge between the character of Charles, and the final male actor in the company Henry, the one male who knows the colour of Ira's skin before he arrives. As Henry, Harry Oliver is funny and interesting, the perfect, relatively quiet foil to the abusive and dominant Charles, and to a lesser extent Bernard.

Of the ladies of the company, the full of fun Betty is played with a vibrant nature by the excellent Franky Harris, a captivating presence on stage once again, although she has relatively little to do at times, she does it extremely well. Finally in the company of actors, is Hannah Magrath's Ellen, challenged with the key character of Desdemona to Ira's Othello. She falls for the charms of Ira, and her complicity to move into his understanding of making the performance more real, eventually leads to his downfall, and here Magrath is understated and believable in the delivery of Ellen, and the best performance I have seen from her to date. 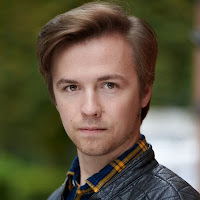 Finally, from the cast, Tim Medcalf is a clear and concise Pierre, controller of the company and not swayed in what he wants by Charles. Medcalf's final scene with Gukas is a stunning piece of writing by Chakrabarti, and delivered with an incredible amount of skill by the two, leaving much thought beyond the final curtain.

I liked Red Velvet, a lot. It's a fantastic play, detailing a fascinating story, and even as a single piece of two hours, it clips along at pace. The whole group of actors are also at the top of their game, each getting all of their characters, and I don't doubt that director Lakesha Arie-Angelo has refined these in exquisite detail with the performers. Perhaps one of the very best of the University of Northampton shows I have seen really from my six years. Just simply superb.

Red Velvet was one of three shows performed at Jacksons Lane Theatre by the University Of Northampton BA (Hons) Actors from Friday 31st May to Sunday 2nd June 2019.