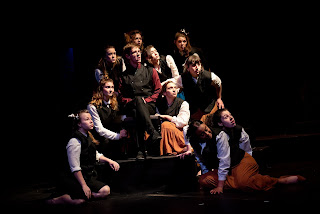 The Third Year BA Acting & Creative Practice students made their final appearance onstage together in an adaptation of Jekyll & Hyde by Royal & Derngate's Erica Martin, who directs with Trudy A Bell. It offered an inventive, if perhaps overlong, telling of the story, but allowed the diverse range of skills from the students to be fully exploited.

This telling of Robert Louis Stevenson's classic, might at times feel a little different to those that know the story well. The piece itself, while in keeping with the Jekyll tale of a scientist exploring a hidden self, also developed a separate story, involving another culprit for Hyde's deadly adventures. This revolved around a local piece of history relating to the 1892 murder of Annie Pritchard (Amy Catherine), and the person convicted of her murder, an Andrew McCrae (Ben Loftus). It's a neat spin on fleshing out the tale, especially to allow more depth for the 23 strong year group to all be part of. 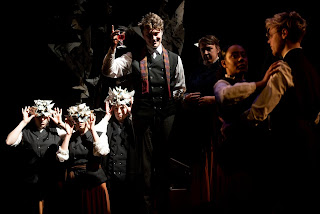 So, Jekyll & Hyde has its fair share of excellent acting and inventive moments, and its strength at all times is the ensemble work, the group generally all work well together, creating vibrant scenes upon the stage bridging scenes as well. These are the strengths of the whole show and keeps the piece interesting.

From the performances, Samuel Jordan is a clear and controlled Jekyll, every bit the thinker and explorer and his discussions with his friends are measured, this gives the perfect balance against George Henry's Hyde. Hyde takes some bedding in from Henry's performance, as at close of act one, he feels totally unconvincing in his fleeting appearance, not menacing enough at all to be the perfect opposite of Jekyll. However, it improves, in the second act, his menace increases, without too much volume, and at play end Henry has created an excellent, and sinister interpretation of Hyde.

Elsewhere there are a superb collection of performances. Rosalie Evans is strong and confident as Victoria, Ellie Lomas is perfectly cast in the lovely little role of Penny Girl especially, and Kyla Williams opens the entire show with a wonderfully evocative speech as Gypsy Woman. 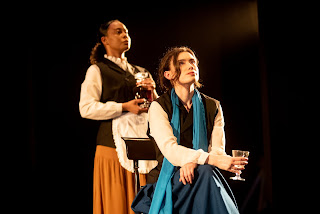 I totally enjoyed the petulant and bolshy performance from Rosemarie Sheach, once again proving one of the stronger performers of the year group. As was Samual Gellard, with his controlling the stage and captivating his audience with his brilliant telling of Annie's story down at the White Horse. Erin Thorpe made an extremely convincing Utterson, in the gender-switched role, sparking in her scenes with Jekyll. Finally, from the cast, Liam Bottazzi created a clipped and precise version of Poole the butler (a role I've played don't you know), maintaining a discreet distance in the background as he should most of the time, but never dropping character. 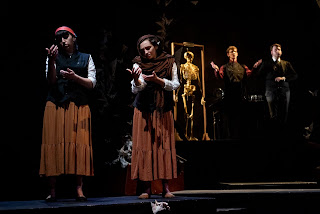 Throughout the piece, there was some excellent setpieces and surprising songs, ensemble ones solid, and a wonderful solo performance from Amy Catherine of We Played A Game. From the collection of clever bobbing choreography during the dance sequence, and the hypnotic song laying behind, there were some truly brilliant moments of both visual and aural treat.

As already mentioned, I think as a piece it was too long, maybe as much as half hour, with some of the first act feeling like filler, although in actual fact, probably more importantly for this university piece, allowing all performers a good cut of the action. Therefore here, unlike other shows, it has to be allowed to get away with some of its bloated nature. 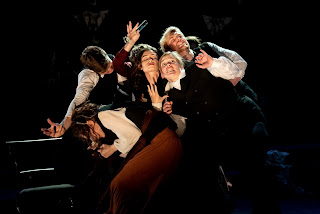 However, no question did I not enjoy it. There was so much to within it, some really neat ideas and totally as expected, some brilliant performances. This year group is mostly an excellent bunch of people, and as they have now parted, I can't help but wish them the best of successes in the future. Most especially the Jekyll's amongst them.