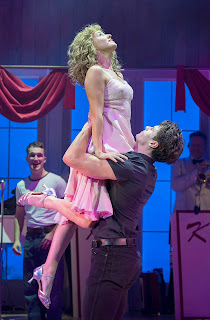 I as a reviewer despise having to write negative reviews, although I suspect many reviewers revel in it, in a weird sort of way. They feel unfair as you know in theory that the performers especially are often just doing what they are told and their very best, well you hope so. Therefore as this tour of the iconic Dirty Dancing travels around the UK, I lay virtually all of the blame of how poor this show is on the director and producer, if that is unfair, I'll take that, but believe me, if you are ever going to, this is a shocker of a show at times.

I was a huge fan of the original film Dirty Dancing in its day, it was a standard little film, nothing award-winning, it just hit a nerve with many people, whether you swooned over Patrick Swayze, or had a crush on Jennifer Grey (hand up here). Baby coming of age through dance with teacher Johnny Castle was iconic cinema, and that is what makes this production so bitter tasting as it rumbles over the characters we grew up loving and makes them either caricatures or sick hybrids of the original.

Perhaps the key point where this production shows it has got it so wrong is the reimagining of that key first love scene between Baby and Johnny. So, tender and loving, slow and sensual in the film, here Johnny rips Baby's top off in wild lust, and Baby rather than the more innocent caress of his bottom goes to shove her hand down the front of his trousers. How could this scene be got so wrong?

Elsewhere the production is poor at times, in the very first scene, the audience is being blasted out of their seats by the brass, drowning out the singing, in a really poorly balanced piece of sound. The musicians are superb, and their final show at the end of the night is one part of the good parts of this production, its just that technically they are poorly supported.

The set looks fabulous at times, but due to the nature of the very many scene changes, it's movement needs to be clean and precise, and often it is not. When two parts of the piece representing the house crash together at one point and elicit laughter from the audience, you know you are having a bad day. Also there is an annoying area just visible, behind the house scenes where you can see heads of actors crossing sides during scenes. Better position of the main house set or an addition to the back set would have eliminated this from everyone's view.

Use of projection works some of the time, but I'm afraid to say that seeing juddering projections in a touring professional production, as in the car driving scene is a definite no-no. Shoddy.

So, to the actors, who mostly I feel sorry for in this, because most of the time, characterisation in the problem. Kira Malou's Frances 'Baby' Houseman looks the part, and apart from her characters alterations that simply don't work, has a great stab at the role, exhibiting all the awkwardness of the girl learning about life.

Michael O'Reilly equally looks fine as Johnny, and when he removes his shirt, to the rather lowly audience reaction, we can all see he, even more, looks the part. He struggles to make the required impact on stage of the character though and is a long way from the mover of his classic predecessor. However, he does nail "the lift" and makes that key moment perfect. 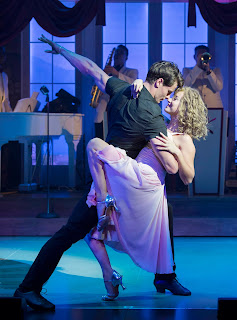 Mr Schumacher, played by Mark Faith, has become an abomination of the character, extremely weirdly played, too mobile, and devoid of the wonderful Mrs Schumacher. I'm not sure what they were thinking! Elsewhere, Lizzie Ottley, who I have seen before and was so much better, here struggles with what she has been made to do as Lisa Houseman, laying more blame on the interpretation.

A couple that do come out of this with their heads held high are the brilliant Amelia Armstrong as Vivian, and the incredible presence that is Colin Charles as Tito. It is just a shame that they have so little to do.

Much of the dancing from the ensemble is excellent, filling the stage with some brilliant numbers, although some of them feel very weirdly out of place, however, at least they are good. Singing is a mixture of successes, some excellent, others really not very good, far too widespread a standard for a professional show.

Dirty Dancing in this form is a mess, poorly produced, one absolutely hideous piece of blocking of a key scene, some odd lighting, often poor sound balance, and a clunky set at times. I was so disappointed with the whole evening, and although much of it was crowd-pleasing at times, especially the add-ons which the modern audience seemed to like. The relative few that stood at the end, especially for a musical, was more than a little telling.

Extremely poor stage version of the classic film, missing so much of the charm of the original⭐⭐½Performance reviewed: Monday 10th 2019 at the Royal & Derngate (Derngate), Northampton.

Dirty Dancing runs at Royal & Derngate until Saturday 15ht 2019 before continuing its tour.