Review of The Woman Who Cooked Her Husband at The Playhouse Theatre, Northampton 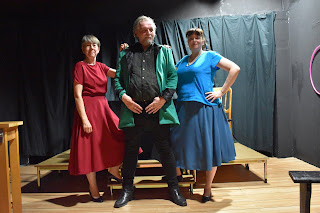 During the interval of The Woman Who Cooked Her Husband, last weeks production at The Playhouse Theatre Northampton, I got involved in a conversation between a couple sitting next to me. The lady was very much of the opinion that the play was a comedy, while the gentleman, had formed one that it was a tragedy. They were joking of course in the conversation, but it did highlight the differences that Debbie Isitt's dark comedy might have between the sexes. And also now perhaps the passing of time. When this was written in the nineties, Isitt's play was a forthright feminist play, heralding the championing over of the ladies over the man. One the ex-wife plotting to cook him, the other, the new lover, potentially already very tired of him after just three years.

The husband, Kenneth (Jem Clack) elopes initially in pursuit of sex with Laura (Diane Wyman), after his nineteen years of marriage with Hilary (Corinna Leeder) has become tired and passionless. Then later, he elopes secretly back towards his former wife in pursuit of better things for his stomach, as his new wife doesn't possess the culinary skills of Hilary.

"Of course you can cook, you're a bloody woman, aren't you?" is his comment to his new wife at the suggestion she can't, and it was one of a few lines, both brilliant and more than a little controversial that got the audience rightfully laughing away to this clever comedy.

However, what of the feminist angle? Perhaps that has dated via the further empowerment of women, but it lives on as a curious piece of social history, as to how 25 years ago, women, via this play, attempted to gain power in the male-dominated world. Isitt's play often makes the women look weak though in it's attempt to empower them. They have a need for this guy, who simply put, is a bit of a slob and not really worth catching really, but in this play they want someone like him to cook for and provide for them. However, it doesn't make it wrong, even now, to see how a playwright back then saw fit to try to gain a rightful foothold in society in the early nineties, and that is much of the joy of seeing this play in a modern context. We are beyond this now (but still not at the equal point), but look folks, this is the sort of stuff that perhaps helped start the charge.

There are three wonderful performances from Clack, Leeder and Wyman in this, all confident and assured in their forming of the characters. In the greatest respect to Mr Clack, he makes a perfect flesh crawling slob of a character, and it sure helped perhaps that the weather caused him to become ever more characterful with sweat pouring from him, although it must have been taxing for all the performers. Wyman is great as Laura, happy to fulfil Kenneth's needs but also gloriously bitchy enough in her replies to give him short shrift when he demands his food, with a curt "make a sandwich". Corinna meanwhile is superb as Hilary, quietly plotting revenge, and she creates a character oozing with interest for the audience, and for me, easily the best performance I have seen from her in my five years of attending The Playhouse.

Staging is simple, really simple (I remain unsure of the hula hoops which occupied left and right walls), but perhaps extremely useful for this piece which is character led that any need for clutter, especially freeing up plenty of space for the meaty monologues that form much of the play. Props are stripped back to such an extent that they don't really exist, with Hilary kitchen knife the sole item beyond the furniture. It's disconcerting at times to see miming of all things, including the simplicity of drinks and would not suit all. However, later, when Kenneth is devouring his feast, it looks sublime in the simple task of imaging his chop dribbling with drool and grease from the food.

It wasn't perfect, there were more than a few volume issues, and not all because of the fans required to keep the theatre cool on the evening. Volumes, as the actors drifted away from the audience, were often not raised enough to carry to the back of the audience.

One of my favourite scenes in the play, was the silent piece performed with strobe lighting as Kenneth went about his day of maintaining his two relationships. The lighting was intense with that in such a small space, but the visual impact that it had on the scene was simply superb, and brilliantly performed by Clack in the languid style.

The Woman Who Cooked Her Husband is very much a product of its time, and it is easy to say that it is dated as a result. However, it stands up extremely well as both a very funny and biting comedy, and as a sort of curious commentary on the recent social history of where we were, where we are, and where we still need to travel. Extremely good fun.


The Woman Who Cooked Her Husband ran at the Playhouse Theatre, Northampton between Tuesday 10 and Saturday 14 2018.